NEWARK – Hours before Newark mayoral candidate and South Ward Councilman Ras Baraka came to Newark’s Ironbound section on Thursday to receive the public endorsement of former Governor and current State Senator Richard Codey (D- 27), numerous neighborhood residents received a piece of mail. The flyer, colloquially known as “midnight mail”, is the type of anonymous, unattributed pamphleteering as common to Newarkers during contentious mayoral races as are cherry blossoms in the spring.

The latest mailed blast blossom falling on certain Ironbound residents came in envelopes with no return addresses, with doubled-sided flyers inside.

On one side is a copy of a letter Baraka wrote in support of convicted gang leader Al-Tariq Gumbs at his sentencing in 2010. Baraka wrote that Gumbs could serve as “an asset to our community” in resolving gang-related conflicts that result in homicides and shootings in New Jersey’s largest city.

On the other side of the flyer, next to a copy of a previously written news report about the letter, are printed these words: “Do you really want this guy to be Mayor?? When I become Mayor WE become Mayor.” The final words are an apparent jab at one of Baraka’s campaign slogans.

But Baraka told PolitickerNJ.com last month that he is unrepentant concerning his support of Gumbs.

“I definitely stand by it,” Baraka said. “We wrote a character letter to help explain what he did for us in the community. And I’ll write it again.”

It remains unclear who produced and distributed the flyer.

Return to PolitickerNJ.com for more coverage of the Newark mayoral race, including Baraka’s anticipated response to the anonymous mailing. 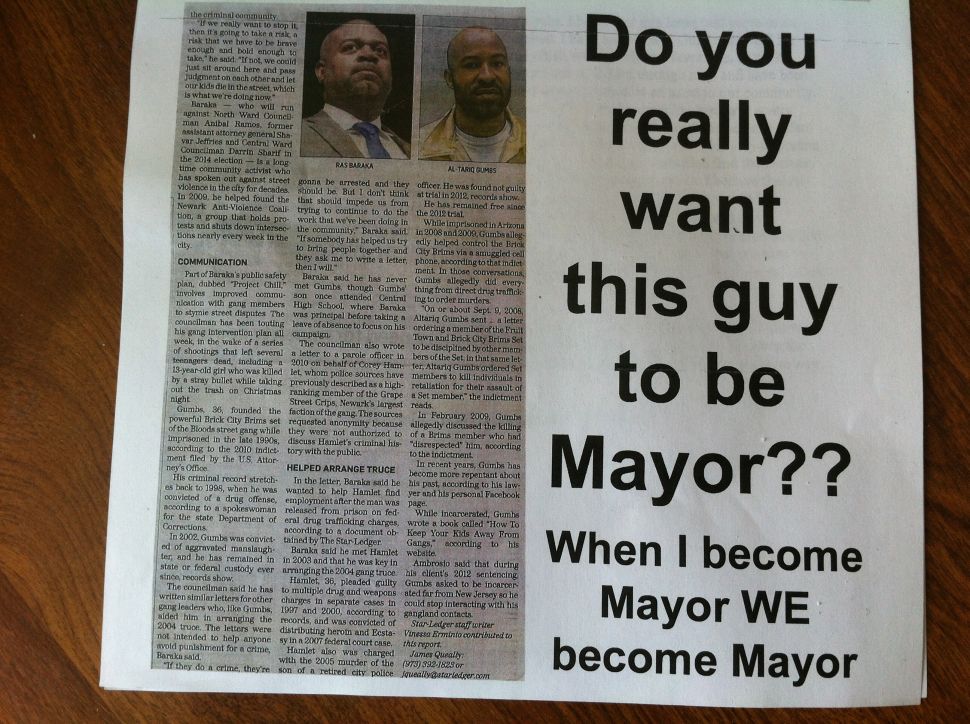