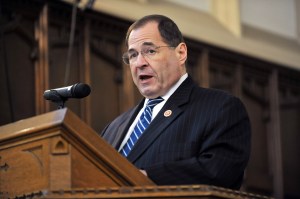 Legislators in Congress today introduced the American Royalties Too Act, a new bill that would guarantee visual artists and their heirs a percentage of the money generated by works sold for $5,000 or more at auction.


“We’ve waited long enough,” said Red Jahncke, a spokesman for Dr. Theodore Feder, who is the president of the Artist Rights Society and a driving force behind the bill. The United States, he said, is “one of the few exceptions, in the Western world, that does not have resale royalty coverage.” Currently, he said, more than 70 other countries allow artists to collect a percentage of the money generated by their works reselling at auction.

Congressman Jerrold Nadler of New York, a sponsor for this bill, introduced an earlier version in 2011 called the Equity for Visual Artists Act. The new draft addresses issues that caused contention in the earlier version by adjusting the percentage artists and their heirs may collect—lowering it from 7 to 5 percent—and by installing a cap of $35,000 as the maximum amount an artist might collect on an auction resale, meaning that’s the most they’ll make on anything that sells for more than $700,000.

The legislation has also been altered so that it would affect more auction houses. The largest houses felt particularly targeted by the proposed 2011 legislation, which only applied to houses generating $25 million or more in fine art auction revenue annually. The new bill proposes a threshold of $1 million, to address the complaint that the most profitable houses might lose business to smaller competitors.

“There will be unhappiness on the part of the auction houses,” said Mr. Jahncke. “This is a load on their business, they’re not going to be happy with this, but their major objections have certainly been addressed.”

Unlike comparable legislation in the United Kingdom and France, the so-called Art act would not apply to private sales. “That world can be totally opaque,” Mr. Jahncke said of art galleries. “You would have a law that would be almost unenforceable.” Auction houses, by contrast, maintain clear public records of sale prices and dates.

“Visual artists are the only members of the creative community in the United States who do not receive residual payments for their works,” said the artist Frank Stella in a statement. “Composers, lyricists, actors, playwrights, screenwriters, all deservedly receive royalties for the later productions, performances, or sales of their works… The adoption of the droit de suite in my country is therefore long overdue.”