Mayor Bill de Blasio today praised some of the biggest names in the real estate industry and told them he has no qualms about building large in the name of affordable housing.

“I’m looking forward to building upon on a lot of the relationships that I’ve already had the honor of having with folks in this room and getting to know people more deeply in the years ahead and working together,” Mr. de Blasio told the group, according to audio from the closed-door meeting released by his office.

“I think we’ve made clear already–with the people we’ve named and with the approach we’re taking–how central this industry is to the vision that I’m bringing forward,” he continued. “And I hope people, as we get to know each other in these new dynamics, I hope people hear me loud and clear that the only way I can achieve my goals is if we are building and building aggressively. I’m deadly serious about 200,000 units of affordable housing.”

Mr. de Blasio went on to say achieving his goal will also take “a willingness to use height and density to the maximum feasible extent. This is something I’ve said in our previous meetings I don’t have a hang-up about. I think it’s necessary to do what I’m here to do.”

Many residents in neighborhoods across the city complain regularly about housing developments they say are too tall or too large for their locations. But Mr. de Blasio said he hoped that, with the promise of new affordable units and a stamp of approval from his administration, such super-sized projects will be swallowed more easily.

“I hope to, to in all of our dealing with communities that we’ve involved in, to make clear that when my administration blesses a project, including a project with a lot of height and density, it’s because we believe we got a good deal for the people. And I think that will change some of the terms of the debate on the ground in communities,” he said.

Mr. de Blasio also stressed to the group that, while he has strong progressive ideals, he understand the need to be practical. The people he’s hired to his team, he said, “share my values, but equally believe in practically, producing values. We’re not interested in theoretical values. We’re interested in getting things done.”

“I think you’re going to see in this whole experience together, I value and prize the practical,” he said.

He ended by calling on those in the room to work with him–both by diversifying the economy and by supporting his signature plan to raise taxes on the richest residents to fund universal pre-K and after-school programs, which he argued would help the city both in the short and long term.

“I could not be more passionate or focused on this. This is the future,” he said. “I’ll state the obvious: We need your help to do it.” 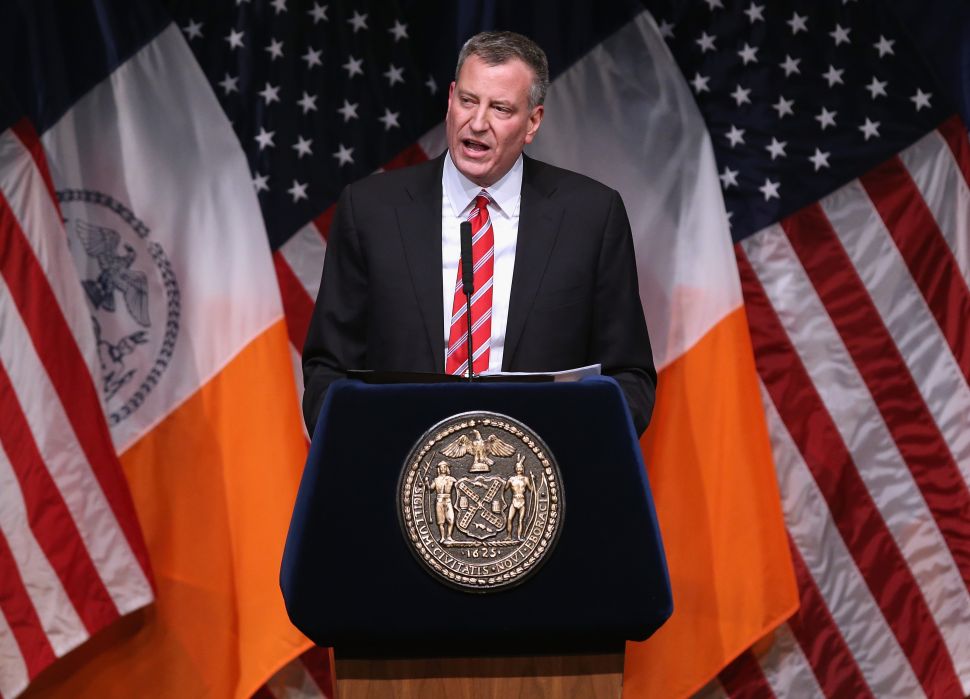