NEWARK – The campaign appearance of Newark mayoral candidate Ras Baraka and his allies in Newark’s Ironbound neighborhood on Thursday night focused on who is truly an outsider in the state’s largest city.

At an event sponsored by Portuguese-American businessman Americo Seabra and NEWPAC, a neighborhood political organization, Baraka addressed an issue in the largely Portuguese and Spanish-speaking immigrant neighborhood that is on the tip of many residents’ tongues, but is often left unsaid.

“I know that people in this community are telling people to stay away, that I have horns, that I breathe fire, that I have 50 people running around me and we’re going to rob you when we come in, that I hate police,” Baraka said to more than 100 people at a Jefferson Street catering hall. “See me for yourself. I never ran from controversy.

“They’re coming with everything they’ve got, all the way from South Jersey and the other side of town, not because they love us, but because they want to control us,” Baraka said, apparently referring to reports from several Democratic sources that indicated that Shavar Jeffries, Baraka’s main rival in the Newark mayoral race, met with Essex County Executive Joe DiVincenzo and conversed with allies of South Jersey power broker George Norcross III regarding his political future. “But we’re not going to let them. We’ve going to control the
community ourselves.

DiVincenzo, who had endorsed North Ward Councilman Anibal Ramos, Jr. before Ramos dropped out of the Newark mayoral race last week, has declined to back either Baraka or Jeffries at this point. But standing behind Baraka, former Governor and current State Senator Richard Codey (D-27) and State Senator Ron Rice (D-28) proceed to take a torch to
the Essex County Executive anyway.

“We’ve got a certain person in this county that thinks he wants to control every doggone politician that walks and has ever gotten elected,” said Codey, DiVincenzo’s longtime critic. “You want someone who is accountable to you, and not to that guy.”

“I’m fed up with a handful of political bosses, with the Joe Ds,” Rice said. “We should be fed up and stop living in fear.”

All Newark residents have reason to fear a high crime rate that the city’s police department is fighting to control. While assertions have been made that Baraka is too sympathetic to gangs and gang members, there was a notable presence of at least a dozen off-duty Newark police officers at the Thursday night event.

Former Newark Police Director Joseph Santiago explained why he believes a contingent of the city’s police officers came out in force for Baraka.

“You have people who are police officers that obviously know better. If there was any truth to [rumors of gang support], you wouldn’t see them in this room,” said Santiago, the Irvington police director who also served as Trenton’s police director and as the State Police Superintendent, said. “Gangs have to be dealt with in a lot of different ways. You have to get kids out of the gang life before they get into it.”

As Baraka gets deeper into campaign mode on the way to the May mayoral election, he made it clear that he will leave no inch of Newark uncontested. 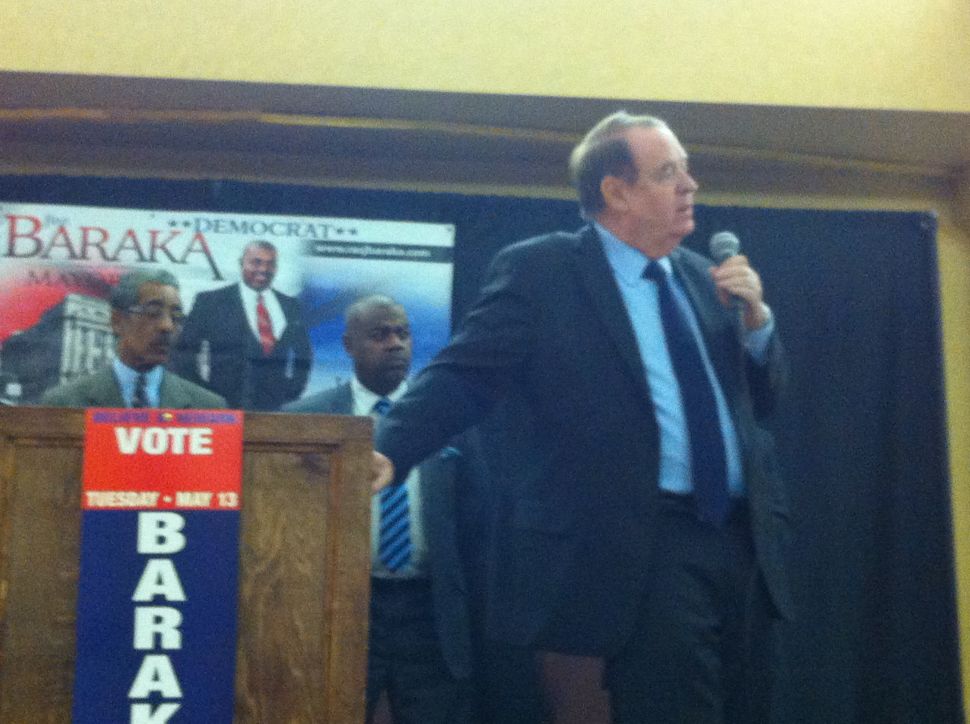