For the past six weeks, @deBlasioNYC has done nothing but retweet a steady stream of posts from UPKNYC–the nonprofit campaign launched to push the new mayor’s plan to raise taxes on the wealthy to fund universal pre-K–blasting the campaign’s messages to the 49,800 followers the then-candidate acquired mostly during his winning race. (The @UPKNYC account has around 2,400 followers itself.)

The Twitter activity makes sense. The feed is now run by Hilltop Public Solutions, the consulting and communications shop that served as a lead strategist on Mr. de Blasio’s campaign for mayor and is now running much of the UPKNYC efforts.

“Broadly speaking they do organizing and we [BerlinRosen] do press [for the UPKNYC campaign],” explained Dan Levitan, a spokesman for the UPK effort who also worked as spokesman on the de Blasio campaign.

Hilltop has an unusually strong relationship with the current mayor. Its co-founder, Nick Baldick is a close friend of Mr. de Blasio and the second person Mr. de Blasio thanked by name in his Election Day victory speech. The firm recently hired Mr. de Blasio’s star campaign manager, Bill Hyers, as a partner. And Rebecca Kirszner Katz, one of Mr. de Blasio’s longest-serving aides, who also worked on his campaigns for mayor as well as public advocate, was a partner at the firm before stepping down to serve as a special adviser to the mayor at City Hall, where she manages communications strategy. (Ms. Katz has “severed” all financial ties to the firm, she told Politicker.)

“Hilltop is closer to Bill de Blasio than any firm–it’s family,” said one insider, who credited the firm with helping pave the mayor’s path to victory but declined to speak on-the-record because he was not authorized to speak on its behalf. “Nick Baldick, who founded Hilltop, was one of de Blasio’s earliest and most trusted advisers on the mayoral campaign, and that elevated Hilltop as a firm to the status of family and inner, inner circle.”

Still, the close relationship between City Hall and a private firm has raised eyebrows among some–especially given the fact that for more than a decade, the previous mayor, Michael Bloomberg, could rely on his own fortune to help drum up support. Some have drawn comparisons to President Barack Obama’s “Organizing for Action” effort.

Others suggested the Hilltop infrastructure could be easily transformed into a re-election effort several years down the road.

The overlaps between UPKNYC and Mr. de Blasio’s election operation are many. As the New York Post recently reported, UPKNYC is filled with former top de Blasio campaign staffers. In addition to Mr. Hyers, who formally set up the 501(c)(4) “to move the mayor’s agenda forward,” its treasurer, Ross Offinger, was the mayor’s former campaign finance director, while Hilltop’s Stephanie Yazgi, who is currently running UPKNYC’s grass-roots operation, served as a consultant on the campaign. (Ms. Yazgi, who previously served as the campaign director for Walmart Free NYC, also happens to be the longtime girlfriend of one of the mayor’s closest aides, Emma Wolfe, Mr. de Blasio’s former deputy campaign manager and now-director of intergovermental affairs at City Hall.)

“Hilltop has Stephanie Yazgi, who is doing all the grassroots organizing. And we have digital component that we’re working on the digital front of the UPK,” Mr. Hyers told Politicker in an interview yesterday about the efforts.

But Mr. Hyers, who joined Hilltop back in December after a brief flirtation with Florida gubernatorial candidate Charlie Crist, said he has largely stayed away from UPKNYC, which is being managed by Josh Gold, who took a leave from the New York Hotel and Trades Council for the job.

“The campaign was a campaign.We were trying to win a political campaign. You know, there a few of the same players but I think it has a whole new definition,” he said. “I think the biggest thing is that Josh Gold is running it. He’s the campaign manager … Josh Gold gets to worry about day-to-day, how to move the mayor’s agenda forward.”

He said that neither he nor Hilltop had any set future plans to assist the new mayor on any issues other than pre-K at this point. But that doesn’t mean Mr. Hyers, who has been busy consulting on several governors races and various other political campaign along with some other private clients, isn’t around to offer advice.

“Anytime the mayor calls, I will happily pick it up and give him my two cents,” he said. “He’s much busier being mayor … When the appropriate time is, I’m sure he’ll call me and I’ll do what’s needed. But right now I’m happily busy happily letting him be mayor and I think he’s happily letting me be the political hack that I am.” 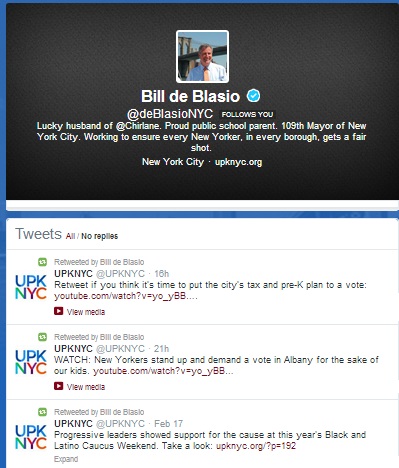