how cool would it be to have a rainbow bookshelf omg pic.twitter.com/r3vtBjqwtg

But there are still plenty of books in the neighborhood.

They are stacked high in the window of Club Monaco, naked without dust jackets, the piles of black cloth spines obscuring the titles. Anonymous, white-slipcovered hardcovers adorn the shelves of Restoration Hardware. At Warby Parker, black-spined books and white-spined books and overly specific categories of well-designed literary fiction convey the brand’s literary bona fides even better than tortoise-shell specs. The upper floor of the nightclub Marquee features shelves of books, in case you wanted to take a break from the dance floor to read Middlemarch over a vodka and Redbull.

In an increasingly digital world, physical books have become a prop. Vintage books are repurposed to make lamps, clocks, night tables, iPod docks and key holders. Book covers adorn shirts, bags and high-end  wallpaper designed to look like the covers of vintage Penguin Classics (“reproduced by kind permission of Penguin”). Books are everywhere, that is, except in tote bags and purses where Kindles now reside in their place.

“Months ago, I saw a copy of White Noise sitting in a clothing store window in Soho,” David Patterson, a literary agent at Foundry Literary + Media, said of Don DeLillo’s breakout pomo masterpiece. “The jacket was, of course, ripped off, and the book was sitting on top of a stack of other chalk-colored books (all de sign books), and the whole [matching] aesthetic of the store was white arctic fur and chrome. I have no idea whether the irony of that was deliberate or accidental, but it sure was real.”

Just as the Brooklyn sensibility of typewriters, record players and small-batch whiskey has infiltrated the mainstream, stacks of physical books are used to connote fashionable old-timeyness. Walt Whitman, with his flowing beard, rough-hewn linen shirt and suspenders, could easily be mistaken for a modern-day mixologist, and Ernest Hemingway would blend into the crowd in his heavy knit sweater and tweed jacket, waiting on line for a cortado at Stumptown.

“There’s a trend right now towards being a little clubby, like the Harvard Club,” said Robin Standefer of Roman and Williams, the interior design team behind the retro aesthetic at the Ace and elsewhere. “It goes back to a kind of mid-20th-century obsession with the club as a place not just to eat or drink something but a place to have deep thoughts.”

Deep thoughts are also apparently at home at the likes of J. Crew and Brooks Brothers, where book-lined walls add atmosphere and connote a customer who prizes quality and tradition, even as said customer peruses shawl-collared sweaters made in China.

“Right now, a certain kind of smart is stylish,” said Jason Diamond, the literary editor at Flavorwire. “The old-school WASP-y prep school look is big, and that translates to books.”

Mr. Diamond wrote an essay for The Paris Review’s blog in 2012 about the rise of books at men’s stores. In the past two years, bibliophilia has crept into cafés, bars and hotel lobbies.

Now it’s also infecting flash sites and shelter magazines. One Kings Lane, the home decor retailer, recently offered a sale on a set of 30 well-designed clothbound editions of Penguin Classics, including a pink and white Middlemarch, the passionate red on red of Lady Chatterly’s Lover and the navy and red of A Tale of Two Cities. The collection was described as “a favorite of interior designers and set designers” that “turns the bookshelf into a work of art.”

Too bad Dorothy Parker, Oscar Wilde and Ralph Waldo Emerson aren’t around to see their bon mots show up on ceramic coasters, cloth napkins and cocktail plates, as they do at Restoration Hardware (currently on sale!), perfect to convey to your guests that you are a witty homosexual, a sassy drunk or a self-reliant transcendentalist. One can only imagine how Holden Caulfield would rail against the phony who buys a box set of J.D. Salinger’s works from Anthropologie. Madame Bovary wanted to escape her bourgeois life, but that clothbound purple and red Penguin Classics edition is just fabulous with the kilim rug.

What would Henry David Thoreau have thought had he known that books would eventually be sold not by the title or author but by the foot, like drapery fabric?

Not a fan of reducing history’s greatest literary works to an accent color? Blame your Kindle.

“With technology today, people aren’t using their books. They have books that they’ve had for years, and they aren’t really buying more books,” said Laura Cattano, a professional organizational designer who frequently arranges her client’s books by color.

Ms. Cattano acknowledged that color-coding books isn’t for everyone, particularly those who may wish to indulge in the quaint pleasure of opening one from time to time.

“When someone has a thousand books and they are really using them, color coding is nonsense,” Ms. Cattano said. “Who is going to remember the color of a book’s spine?”

“I have too much respect for books,” said interior designer and author of Fifth Avenue Style Howard Slatkin. “There is nothing that gives a house more warmth and personality. But  when people take books and arrange them by color or stack them and put objects on top and treat them as mere decoration, I find it offensive.”

Secondhand book stores aren’t offended. The Strand does a brisk business in books by the foot, as does Housing Works, a nonprofit thrift enterprise that got into this sideline a few years ago.

Housing Works’ first books-by-the-foot client was the Cooper Square Hotel, now called the Standard. The hotel wanted to decorate the rooms with a splash of books in a single color and furnish a downstairs library. What better way for a place to seem new and old at once?

Ersatz home libraries are not altogether new. When I was a child, I was fascinated by the fake book wallpaper that lined the study in my suburban relatives’ house. To me, it epitomized the idea of style over substance, a bold assertion that the suggestion of books was indistinguishable from actual books.

Now, it seems that my relatives were trendsetters 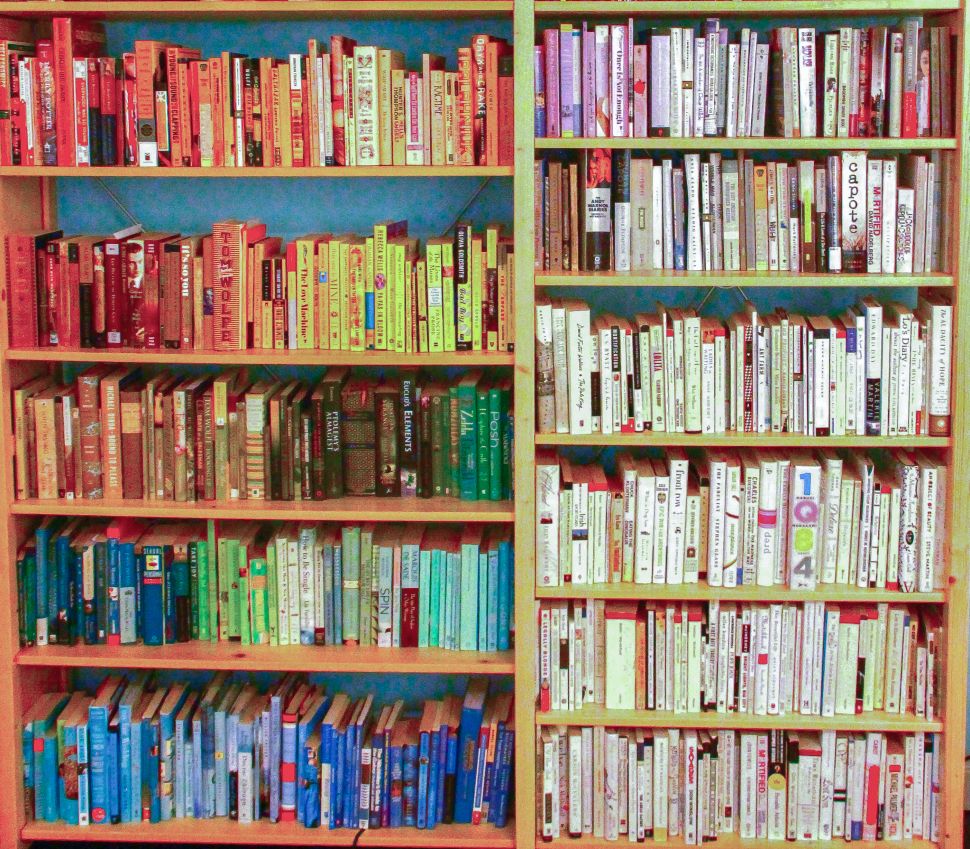