At least two New Jersey Democratic Party officials appear poised to be laying the foundation for a future gubernatorial run.

Senate President Steve Sweeney and Jersey City Mayor Steve Fulop have slowly begun setting up the needed infrastructure to lay the preliminary groundwork, they’ve been building relationships, and the war of words between the Steves has been fairly well documented (click here, here or here).

However, the friction, to some, suggests the North-South divide could clear the path for another candidate to bridge a possible disconnect within the Democratic Party.

The so-called Bridgegate scandal that has so far consumed the Gov. Chris Christie administration as the Republican executive forges a second term in office has also directly or indirectly added other Democratic names to the list of possible contenders. U.S. Rep. Frank Pallone and Assemblyman Jon Wisniewski have received their fair share of attention in the recent weeks as a result of the bridge scandal.

But controversies aside, a third name has been discussed in Democratic circles as a serious contender if he so chooses: U.S. Sen. Cory Booker.

“I think there’s no question right now that, in my mind, if he’s interested, he has the ability to probably very quickly clear the field and unite the party,” said a Democratic source.

“He’s immensely popular and he has tremendous name identification already,” the source said. “I think he clearly would be more than formidable.”

Both Fulop and Sweeney face significant challenges moving forward if they hope to secure the party for a gubernatorial run.

Fulop would need to unify the north, an area known for having competing interests. And while Sweeney would enjoy the support of a unified south, he’d be lacking the sheer numbers that reside in the north.

Booker could break a potential gridlock, some say, who also agree the freshman lawmaker faced with his own re-election bid this year is clearly a Democratic Party official who has higher office on his mind.

“Clearly, he’s a guy who is going to be in the national conversation and he has a lot of career ahead of him … and the chance to get to the next level,” the source continued, adding that while being the executive of the Garden State comes with its own challenges and possible pitfalls for future runs, “The Senate is a long-term game that rewards length of service and it rewards people who get into the nitty gritty on policy.”

However, not everyone within the state’s majority party and who would have knowledge of possible discussions of gubernatorial run believe it’s a route Booker is contemplating as a pathway to higher office.

“At one point he was very interested,” another Democratic source told PolitickerNJ.

“He went through the process … and I think [a decision had] been made,” the source said, arguing “it’s not a direction” Booker is likely mulling currently.

After all, Booker already has executive experience, the source notes, arguing further that the challenges New Jersey’s next governor would be likely face could bestow its own set of problems on a presidential hopeful’s game plan.

Of course, many in the Democratic Party have been left in a holding pattern as they wait for the dust to settle that was kicked up by the dueling investigations into the current administration. And to complicate matters further, Booker is said to be a likely vice presidential candidate if Hillary Clinton clears the path in 2016.

“He’s definitely going to be looked at,” a powerful North Jersey Democrat said.

“The short list for vice presidents is not out there right now,” the source said. “But Booker would be considered.”

The vice presidency would serve as a better platform for Booker and being considered for the spot is enough to put the lawmaker in another holding pattern of sorts.

But what of a gubernatorial run?

“This state is so unique,” the source said. “Some people, I know, would try to convince him to run to offset those two guys.” 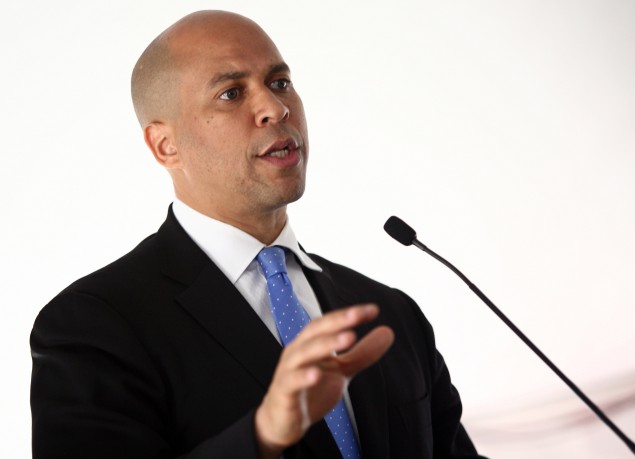