Gov. Andrew Cuomo today suggested a new superhero based on his stint as governor, while taking a break from budget negotiations in Albany to announce a deal to film a new series based on the Marvel comics characters in New York.

“It just occurred to me as I was sitting here, there’s a sequel here … I can see it: Boy from Queens goes to Albany to fight the evil empire and bring justice to the people of the state,” joked Mr. Cuomo, who made the announcement at the Good Morning America studios in Times Square.

“It is a very, very big deal. It’s also very cool, especially for a guy like me who deals with what he deals with all day long. To be in the world of Superheroes is pretty cool,” he gushed.

The deal between Netflix and Marvel will bring the “flawed heroes of Hell’s Kitchen” characters to the popular online streaming service. The series, set to begin filming in September 2014, will include four live-action shows focused on Daredevil, Jessica Jones, Luke Cage and Iron Fist, and will culminate in a mini series starring all four characters teaming like in “The Avengers,” said Bob Iger, the chairman and CEO of the Walt Disney Company.

The deal will drive $200 million in revenue to the state and create 400 full-time jobs–marking the largest film or television production commitment in New York State history, said Mr. Iger, who credited the deal to the state’s generous tax credit system, which gave away nearly $500 million last year.

Speaking to reporters after the announcement, Mr. Cuomo–who said that he already had a cape at the ready–eagerly repeated his pitch to the gathered crowd.

“I think that work, right? Boy from Queens. Think about it. Goes to Albany, fights the evil empire on behalf of the people of the state to bring justice back. In the end, the sun shines again,” he said.

Asked by Politicker to identify his superpower, he didn’t hesitate.

“Oh, superior intellect!” he said with a laugh, pointing to his head. 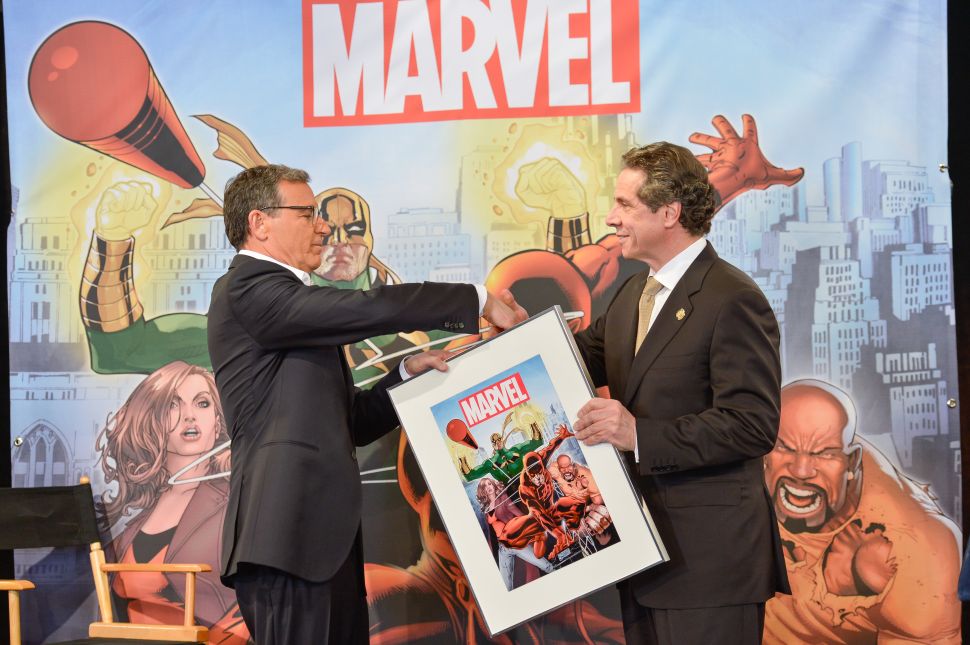