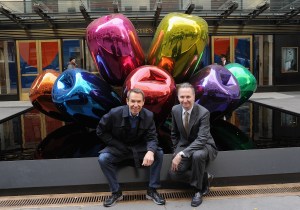 Gorvy with Jeff Koons and a record-setting work by the artist that sold at Christie’s. (Courtesy Getty Images)

Brett Gorvy, Christie’s international head of postwar and contemporary art, recently told the French financial newspaper Les Échos that most of the people who spend $100 million at auction were unknown to the auction house three years ago.

The full interview is in French here. Google Translate it! Fascinating, candid stuff.

Another great quote we should have initially highlighted, courtesy M. Allen:

“These new collectors, do they have advisers?”
“No, [their] advisers are Christie’s specialists.”