What Penn Station could be, as rendered by Skidmore, Owings & Merrill.
(Renderings designed by som/ww© SOM)

It was a good year for New York.

In 1939, Rockefeller Center was finished, joining the Empire State Building and Chrysler Building in looming large over the city and the world. LaGuardia Airport opened. And not just the World’s Fair rolled into town, but also the first World Science Fiction Convention. Lou Gehrig, in retiring after establishing a record 2,130 consecutive games played—a record that would last until 1995—called himself “the luckiest man on the face of the Earth,” and he was not alone. New York was a city brimming with tempest-tost legends. The “Wonder City,” they cheered. It was the year Batman arrived in Gotham and Dorothy arrived in the Emerald City. Call it whatever you want. Everyone knew it was New York.

People forget just how radical Rockefeller Center was. At the time, it was the largest private building in the world, boasting Radio City—itself billed as the world’s largest theater, named for a contraption that had only been in commercial existence for 20 years. Rockefeller Center, which got 40,000 workers through the Great Depression, triggered a boisterous ambition in city planning: The United Nations, Stuyvesant Town, J.F.K. airport, another World’s Fair, Lincoln Center, the World Trade Center and Battery Park City all followed.

But how has New York City grown lately? There’s the stupid multibillion-dollar glass penis contest along 57th Street, vying to see which foreign oligarch’s uninhabited penthouse can block out the most sun on Central Park; the decadent playground of Governors Island, where Madonna can watch Prince Harry play polo and Lady Gaga can decorate her album premiere party with metal balloon sculptures from Jeff Koons; and the 1,776-foot Freedom Tower, built in just twice the time it took Dubai to erect the 2,717-foot Burj Khalifa. We’re stealing London’s idea to build a Ferris wheel, and we’re not even building the world’s biggest. Yes, the High Line is pretty, but as it inspires worldwide mimics, we can’t even extend the concept to the so-called QueensWay or Lowline. And the pudongulous architecture porn of Hudson Yards is certainly cool in a Hill Valley 2015 way, but it’s basically a glass Rockefeller Center, and that’s a 75-year-old concept.

Even Barclays Arena—no disrespect, Jay Z—is not the Eighth Wonder the way the Empire State Building was. Too much of New York’s development future looks like Willets Point’s redevelopment plan, where it’s just keeping up with the gentrifying Joneses. New York is at risk of becoming history’s next Venice, Paris or Chicago—a beautiful city that serves as a reminder of glory days gone by. (Renderings of Penn Station designed by som/ww© SOM)

Our new mayor is going to do a lot—or try—in his time in office. As all mayors do, he will tinker with the police, with schools, with hospitals, with unions and transit and Gordian knots of red tape. But so far, he hasn’t dedicated himself to any vision grander than shoveling snow, ending horse-drawn carriages or stopping fatal traffic crossings.

New York is at risk of becoming history’s next Venice, Paris or Chicago—a beautiful city that serves as a reminder of glory days gone by. Even if every building in the city were to become green and LEED-certified overnight, we would still have an unsustainable city, because we are so busy polishing 20th-century New York that we have not confronted 22nd-century New York.

Even as architects—noble, influential ones—propose intriguing, new, mega-density structures, density in the city is decreasing. Writing in favor of greater density in The New York Times in August, the Columbia University historian Kenneth Jackson noted that 31,000 buildings across the city are now landmarked, complaining that “entire blocks are frozen on the logic that the first buildings ever put there are also the best that could ever be imagined there.“

Last year, by contrast, Skidmore Owings & Merrill suggested a radical rebuilding of the Penn Station and Madison Square Garden area: expanding the footprint by two blocks and maximizing the air rights to create an awesome structure with quadruple the green space of Bryant Park, the housing capacity of Tudor City, the commercial capacity of Rockefeller Center and the cultural capacity of Lincoln Center, all while connecting Penn Station to future high-speed rail systems and all the local airports.

It is gorgeous. It is inspiring. And, sadly, it is doomed. Instead, we’re going to build Moynihan Station, which is the Hudson Yards version of 101-year-old Grand Central Terminal. It is not just boring. It is the only thing worse than boring: It is predictable.

What New York needs is a radical change, and here it is: Make Roosevelt Island, that anointed vanguard of big-think expansion, the sixth borough. Give Silicon Alley the ability to create something there more than just a Cornell extension and some Wi-Fi-enabled condos. The honeymoon with San Francisco is over. They’re talking about floating boat-cities in international waters. They’re talking about secession. Give them their very own Island of Misfit Joys where they can build not just a tower, not just an office park or mixed-use claptrap, but something truly revolutionary, an epic redefinition of architecture as novel as that Chicagoan term from 1888: “skyscraper.” Look at John Hauser’s Borough No. 6 proposal, Vincent Callebaut’s Dragonfly concept or even Roger Marvel Architects’ Brooklyn Yard-Scraper and its brownstones built dozens of stories up.

Is it possible to have a borough that’s only 2 miles long and 800 feet wide? With just one subway station, a rickety gondola and the threat of being underwater in a century or two? Good! Use those challenges to drive innovation. Make Roosevelt Island that anointed vanguard of big-think expansion, the sixth borough. Give Silicon Alley the ability to create something there more than just a Cornell extension and some Wi-Fi-enabled condos. (Renderings of Penn Station designed by som/ww© SOM)

One of the best views of the city is to gaze downtown upon the still-handsome Woolworth Building, which opened as the world’s tallest building in 1913—nicknamed the Cathedral of Commerce for its neo-Gothic style—and now is dwarfed by all the greatness that followed.

If Mayor Bill de Blasio is so enamored with the idea of merging the two cities in his tale, what better way than to build something that radically entwines the meanings of community, neighborhood, environmental impact, infrastructure, resiliency and the melting pot strength of this haven for huddled masses? The Hoover Dam of city planning. If we don’t, any number of other cities will: Beijing, Dubai, Hong Kong, London, Mumbai, São Paulo, Shanghai, Tokyo.

Do you know what makes the Empire State Building beautiful? That ray-gun-looking addition to the top, its never-used zeppelin port. Whatever we build on Roosevelt Island doesn’t have to be perfect. It doesn’t even have to work the way we expect. It just has to make the world feel inspired about the city’s tomorrowland—the 50-years-from-now tomorrow, not the five-year outlook for condos in Greenpoint—and, wow, what a wondrous city that would be. 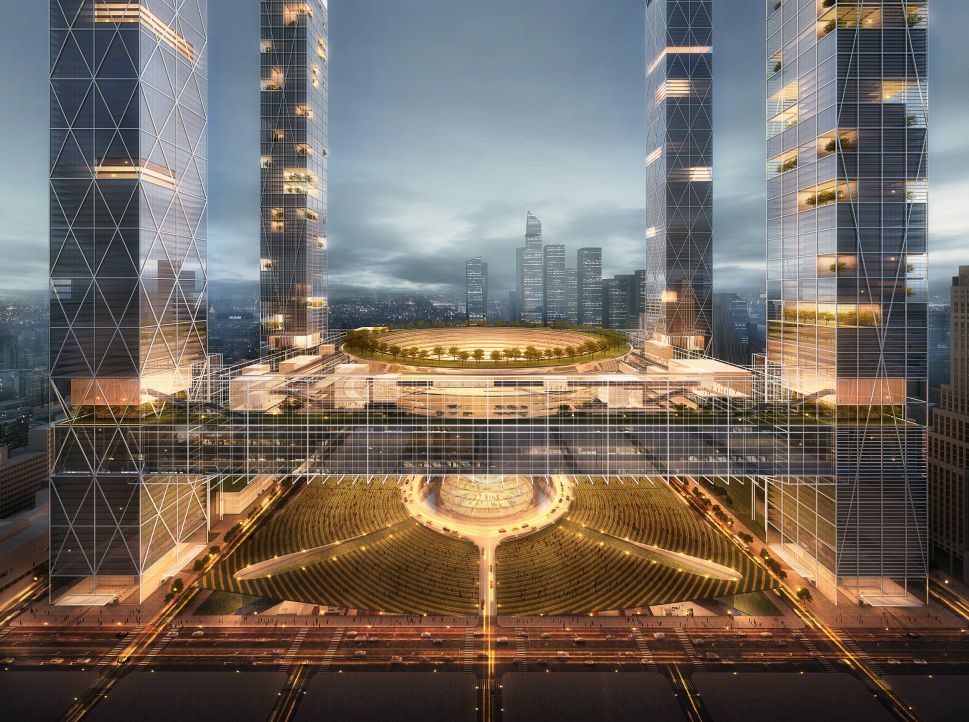