In pursuit of a fourth term, incumbent Irvington Mayor Wayne Smith has lost an ally this time in Freeholder Bilal Beasley, but he’s also confident of political moves that could frustrate the enemy in time for May’s nonpartisan election.

The veteran Smith (pictured) also rejoices in a field crammed with challengers, not all of whom have actually yet filed to run.

Unlike Newark, Irvington doesn’t have a runoff. A person can win the mayor’s race outright by one vote.

Harried through the years by Councilman David Lyons – a key Irvington ally of state Sen. Ronald L. Rice’s (D-28) – Smith has deflated Rice’s unerring enthusiasm for Lyons by adding a council candidate to his own ticket with unmistakable connective tissue to Rice.

Leach is a staunch ally of Rice, who has long run the senator’s campaigns.

Now he’s hooked up with Smith, an alliance that will at the very least dampen Rice’s efforts on behalf of Lyons, Smith hopes.

Once Smith’s biggest local backer Beasley, for his part, wants School Board President Tony Vauss to be Irvington’s next mayor.

“Seventy-percent of our kids are not meeting the standards,” said the mayor. “All of the work we’re doing in the community in terms of adding recreation programs and after-school programs doesn’t diminish the tremendous work they have to do over there. The high school still has heating problems. My wish was people would focus on those issues, but anyone can run for mayor.”

Smith has had to weather his administration’s own barrage of bruising headlines, many surrounding the plight of suspended Police Chief Michael Chase, under investigation by the Essex Prosecutor’s Office for allegedly squelching a probe of his nephew, a local cop.

Smith won’t comment on the ongoing case, and instead focuses on his Police Director, Joseph Santiago.

“Joe’s been with us since 2008 and last year we reduced crime by seven percent,” the mayor said.

The breakup of Beasley and Smith exposed other fractures, too, like the one between the mayor and another ally, Councilman John Sowell.

“John Sowell wanted to be part of my administration, and when he didn’t meet the qualifications for neighborhood services director, he announced that he was running for mayor,” Smith said. 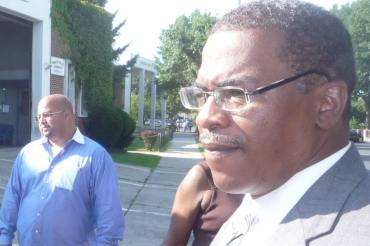