Provided that public transportation is operating normally, you can expect to spend between an hour and ten minutes, and one hour and thirty minutes traveling from midtown Manhattan to City Island, in the Bronx—roughly as long as it would take, from the same starting point, to reach Philadelphia by car in light traffic. If you take the fastest route, you will disembark from the subway at Pelham Bay Park, the northernmost outpost of the 6 line, which often exists, in the minds of midtown commuters, more as an idea than a tangible place—like the North Star, or the Mariana Trench.

It was here that we found ourselves shivering on a recent Saturday afternoon, bound for the City Island branch of the New York Public Library, where the Hart Island Project—a public charity—would hold an open meeting and which, in a poetic bit of bumbling, shelves Shakespeare and Milton in a section marked “Non Fiction.”

The meeting would reopen discussion about transforming Hart Island—the dimunitive landmass in Pelham Bay that hosts the country’s largest potter’s field—into a city park, which hit a snag late last year when a bill in city council to initiate the overhaul failed to make it out of committee. The group hopes to make good on that legislation—which would preserve the island’s use as a cemetery—in March, when Councilwoman Elizabeth Crowley is due to reintroduce it.

To reach Hart Island, you take the same boat that ferries the Rikers inmates responsible for digging the trenched graves that entomb New York’s unidentified, unclaimed and stillborn. The ferry leaves at 9 AM from a restricted City Island dock Monday through Friday, and to catch it, you will need identification, so that the Department of Correction, which has jurisdiction over Hart Island, can record your visit. When you reach the island, your pilgrimage will go no further than a gazebo of unfinished wood near the , from which no graves are visible.

Melinda Hunt, director of the Hart Island Project, has spent years working to make the island more accessible, and to acquire and publish the cemetery’s burial records. But the Department of Correction has more experience—and affinity for—limiting access than providing it, and progress has been slow.

“You have to know quite a lot in order to get information out of the Department of Correction,” Ms. Hunt told us. “I usually have to prove to them that they have the information before they will give it to me.”

Since 1869, nearly one million have been buried on Hart Island, and in the estimation of archivists, most any citizen whose ancestors passed through Ellis Island has a relative there. To some extent, that fact testifies to the prevalence with which American families are touched by poverty, addiction and madness. But as Ms. Hunt told us, it also suggests how easy it is—how many ways there are—to go missing in New York City.

“I work with a lot of families who are not indigent and whose family members disappeared for whatever reasons they disappeared,” she said. “I do not find that it’s a homogenous mix of people.” Mistakes made by police, medical examiners and hospital attendants have accounted for many burials on Hart Island, a fact evidenced by a frequency of interment that has decreased with falling infant mortality rates and improvements in the science of identifying remains. (Many of those laid to rest are stillborn infants whose parents do not realize what burial at the city cemetery entails.)

Recently, there has been something of a thaw: A Times reporter was allowed on Hart Island in November—the first such concession in years—and Corrections approved a special visit of eight women to their infants’ graves, a privilege that, legally speaking, would be difficult to limit to that group going forward.

Still, Ms. Hunt believes that Hart Island would better serve the public under the auspices of the Parks and Recreation Department. Parks, however, is loath to assume control of Hart Island, though Prospect Park has an active—albeit independently administered—cemetery.

The low-ceilinged back room where the meeting took place was filled with a predominately local, elderly crowd. Some seemed to have come for lack of alternative entertainment, while others clutched notebooks and Hart Island news stories printed from the internet.

After a brief introduction, Ms. Hunt opened the floor for discussion, which did not adhere strictly to the matter at hand.

“I think it’d be better if inmates didn’t bury the dead, first of all,” an older British man with icy blue eyes and a red scarf told the group. “Having inmates bury these people suggests that poverty is something to be ashamed of.”

A number of attendees inquired as to the fate of the abandoned buildings on Hart Island, which have been used variously as a prison, an asylum and a boys’ reformatory. And from the back of the room, a stubble-cheeked young man with a wide, shell-shocked gaze offered: “Hart Island is sad, but not dark.”

“Corrections is a very powerful and secretive organization,” said the British man, who spoke in a high, sing-song rasp. “They do their job very well. But the way they do things is the way Corrections does things.”

A gray-haired woman in an electric turquoise sweatsuit recalled visiting Hart Island many years ago, for a picnic with her sister. “We took a speedboat,” she said. “We weren’t supposed to be there. One side of the island was all green and nice and clean, and on the other side, we saw the body boxes—what do you call them?—coffins! We saw coffins sticking up out of the dirt, and bones scattered.” She paused, considering. “It was really strange,” she said. “It was just so strange.” 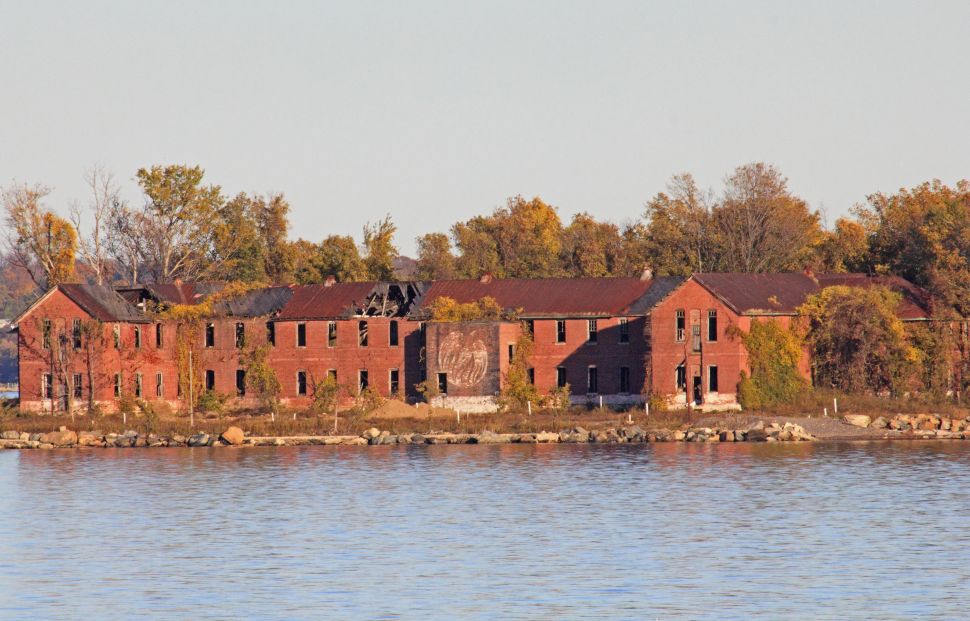