“I look at energy issues as national security issues,” said Chivukula, who wants Gov. Chris Christie to reverse his opposition to the Regional Greenhouse Gas Initiative (RGGI) and sign Chivukula’s bill that Chair Assemblywoman L. Grace Spencer (D-29) and other committee members shipped out of committee.

“We need to develop a longtime strategy,” added the third candidate in the race to succeed retiring U.S. Rep. Rush Holt (D-12). Playing the good progressive pro-environment Democrat while Watson Coleman and Greenstein punched and counter punched, Chivukula today in a conversation with PolitickerNJ landed a blow on Christie.

“It was a big mistake,” he said of the Republican governor pulling out of RGGI.  “At that time he might have had a reason but they have corrected the mistakes and the Republicans should go back and rethink this. Increasing energy efficiency – we need to think about that.”

A source said Chivukula’s bill is going nowhere fast, adding with a bored Statehouse sigh that it’s a metaphor for the Somerset County lawmaker’s congressional candidacy (the second in as many years, in a second congressional district).

But Chivukula wants to carve out some traction as the man left shivering in the cold as Greenstein and Watson Coleman consolidate power in their respective power bases of Middlesex and Mercer.

“As a scientist and electrical engineer, I have a unique way of thinking,” he said. More than that, he’s trying to turn the establishment freeze-out into an argument for strength.

“I called Middlesex County Democrats and said I was looking for an opportunity to present myself and would they consider me,” Chivikula said, reflecting on the aftermath of Holt’s announcement and his decision to pursue the seat. “I did not get that consideration. They were asking me to leave the race.”

Does he fear losing the party line in Middlesex?

“When I reminded them that this is an open seat, I was told that my decision will have repercussions,” he said.

A resident of Franklin Twp. in Somerset, Chivukula relies on Middlesex County Democrats for support.

The committee would assess, and all the district leaders weigh in on the situation.

But a smarting Chivukula would.

“This is about leadership,” the assemblyman said. “Each and every one of us has the opportunity to show leadership. I want to demonstrate my leadership by taking the risk. I am the best qualified candidate to succeed Rush Holt.  They want people who can rubberstamp. I left India with 8 dollars in my pocket. How much more risk can you take?”

He acknowledged, however, the drain of having to weather the leader of his own district ticket, state Sen. Bob Smith (D-17), tell him he’s not backing Chivukula but fellow Middlesex County Democrat Greenstein.

Chivukula was prepared to vigorously move forward with the campaign, counting on support from his home county of Somerset. 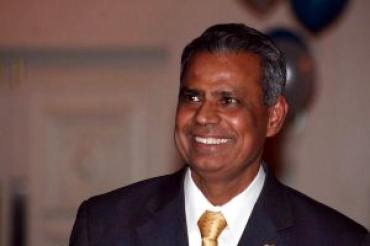