On our tombstones, etch the words “death by chocolate.”

City Bakery’s Hot Chocolate Festival lasts from February 1st to the 28th, but ain’t nobody got time for that.

For 28 days the bakery introduces a new hot chocolate flavor daily, sometimes with multiples options a day. Luckily, founder and owner Maury Rubin was kind enough to let us try ten cups of different flavors in one sitting.

Which, admittedly, was harder than it sounds. We pushed through the bakery around lunch time — the place was packed — to find Mr. Rubin in the very back. He looks exactly like what you would picture a guy that makes hot chocolate for a living to look like — white apron, bandanna, cordial smile.

Together we commandeered the only free space in the building, a wooden table without chairs next to the back buffet. As we waited for the hot chocolate to be finished, Mr. Rubin advises us to watch the “hot chocolate activity” going on.

We asked which part is the “hot chocolate activity.”

“Pretty much all of it,” he said with a wink. And he’s not wrong.

Behind City Baker’s counters, pots of the thick, hot drink were being stirred, while a mug was visible on almost every tray in the house.

“This will come in handy,” Mr. Rubin told us, placing a tall glass of water on the table. Ominous.

First up was a mug of City Bakery’s Original hot chocolate along with a caramel flavored companion cup. The Original blew away every cup of powdered hot chocolate we drank in college. It was far more akin to a cup of melted chocolate than Swiss Miss.

Two flavors down, and they were delicious. We could do this, no sweat.

But the chocolate train kept on rolling.

Mr. Rubin brought out two more cups. One was chocolate with a hint of banana peel. The second, a splash of ginger.

We downed them with slightly less gusto than the first two. By the time Mr. Rubin placed a Sunken Treasure Hot Chocolate — two truffles and caramel “coins” underneath an ocean of hot chocolate, people were starting to watch. An older woman passing by, curious about the cups, called us “overindulgent.” She had a point.

We ate the truffles.

Next was what Mr. Rubin called the “emotional satisfaction” portion of the afternoon. First, “Happy” Hot Chocolate, which is vanilla bean mixed with milk chocolate. Then, French Follies Hot Chocolate, which Mr. Rubin compared to a “long night of debauchery.” It was a mix of dark chocolate, pomegranate, black pepper and espresso. And we tasted the debauchery in cup number seven.

We’ve had nights out with less flavors in our mouths happening than French Follies offered. Much like those same nights out though, we started to keep an eye out for restroom signs. We took a quick “break” with the French Follies’ cousin, Espresso Hot Chocolate. By break we mean we only took about two sips. Not that it wasn’t good, but we were verging on “burst balloon” at this point.

The penultimate flavor was the “Ode to the Polar Bear,” City Bakery’s only white-chocolate flavored drink. Mr. Rubin himself toasted a cup of the Polar Bear of his own with us, saying it has “won him over in the past weeks.” Despite future plans for more white chocolate in the future, Mr. Rubin explained why there was only one option.

“There is a natural knee-jerk negative reaction when you say white chocolate. It is the same as saying there is an organ meat option for a lot of people,” he said.

The final flavor was an interesting one, the Stout Hot Chocolate. The mixture of booze and hot chocolate had us wary — especially as the tenth flavor — but it surprised us. The stout taste blended unexpectedly well with the chocolate.

“‘Not what I expected’ is a good phrase around here,” Mr. Rubin said proudly.

For his part, Mr. Rubin — who heads the production of all City Bakery’s hot chocolate — seemed genuinely interested in creating something new, using hot chocolate as his platform.

Now that the Hot Chocolate Festival brings in an average of 2,200 people a day in February, City Bakery’s going to need as much of Mr. Rubin’s imagination as possible.

“I see more space for more people,” Mr. Rubin told us about the future of the Chocolate Festival.

Not enough space? We could say the same thing for our stomachs right about now. If anyone needs us, we are going to go throw up and die. 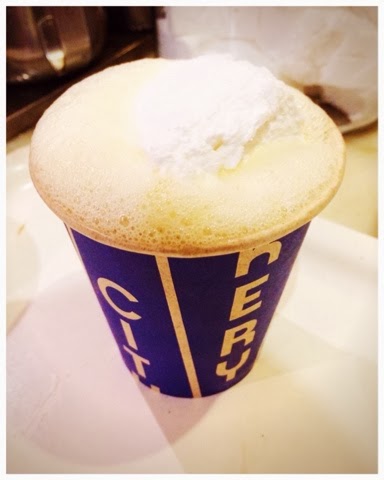