During a recent morning rush on the subway, something new happened.

At about quarter to nine on a jam-packed D train, as the doors opened at Rockefeller Center, my cell phone rang.

First, I didn’t even know it was possible for phones to ring in the subway. Second, it seemed like the height of bad manners to be getting a call in such a crowded space.

So I reacted as if my phone were ringing in a theater, trying with fumbling embarrassment to shut it off.

As a code of etiquette, this of course is absurd. People barely even shut their phones off in actual theaters anymore.

Just getting to it was also quite difficult, hidden as it was under all those winter layers. And every movement elbowed some other, over-caffeinated citizen of the tensest city on Earth. I felt like a vaudeville escape-artist, trying to wriggle out of handcuffs inside a shark tank on-stage.

Cell phone service has been expanding underground since April last year, when Gov. Andrew Cuomo announced the MTA would extend the program to 36 stations.

This has created a confusing patchwork of areas on the subway network where your phone will get reception. If you use your wifi-enabled device to consume media on the train, you may have noticed its impact on some popular apps.

For example, I read the New York Times on my way to work each morning. But as my phone picks up a signal coming into the 59th St station, the Times app usually freezes. That means the touch screen won’t respond until I leave the signal and can relaunch the app, closer to the unwired 7th Ave station.

This difficulty seems to result from connecting with the signal provided by Boingo, which holds a sublicense to operate wi-fi in subway stations.

Some things—like sending texts, making a call or even tweeting—you can do as normal. But to launch your phone’s internet browser, for example, you will be directed through a Boingo interface. This might require you to watch an ad (usually “Visit Phoenix”) or download a third-party app (Hotels.com for example, or Seamless) before connecting with the free wi-fi.

The trouble is, this takes so long that you usually have not completed the task before your train arrives, or the train you’re already on leaves the station.

And the patchy network means using your device on the subway can be a comedy of error messages.

Last weekend, for example, I was trying to read a Times story about AOL boss Tim Armstrong and the furor over his “distressed babies” remark. The article contained a link to Slate.com, where the novelist Deanna Fei had outed herself as the mother of one of the children.

Riding the D line means alternating between wi-fi coverage areas and black spots in quick succession. Between freezing, relaunching and refusing to load, the Times app just wasn’t having it.

But the more difficult it was to read the story, the more desperate I became to click on the link. Finally I got through, only to find the Times had mistakenly linked to the second page of Fei’s article, which opened by scolding anyone who was interested in the story.

“[F]odder for reporters to gleefully note Armstrong’s previous gaffes, a titillating item of news gossip for his colleagues to pick over,” she called it.

I never could open page one of that article. And I emerged from the subway system feeling like I’d just been slut-shamed by the author for being curious in the first place.

Such are the technological marvels of 2014: you can almost read a newspaper on your device underground. And your phone can go off in the middle of a crowded subway car, which is like waking up a cave full of angry, hibernating bears.

All this feels suspiciously like a joke being played on us by San Francisco. 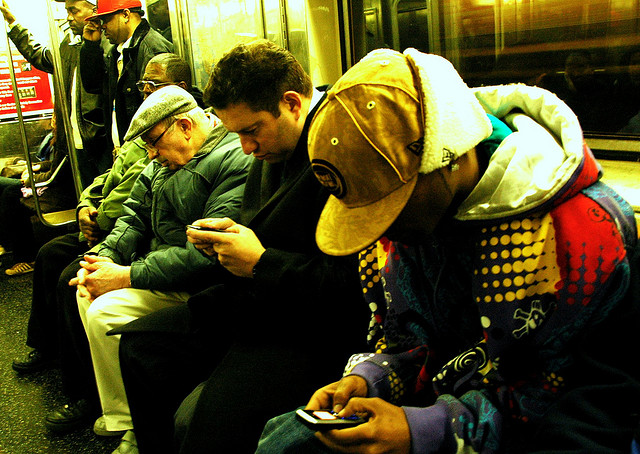