Mayor Bill de Blasio today appointed Carl Weisbrod, the co-chair of his transition team, to be the new chair of the City Planning Commission.

Mr. Weisbrod has more than three decades of experience in city government, which Mr. de Blasio touted this afternoon as he announced the appointment at a press conference at City Hall.

“For me, this is very, very personal. Carl has been a friend and someone I’ve respected for over than two decades,” said Mr. de Blasio, as he ran through Mr. Weisbrod’s resumé, which includes time as an anti-poverty lawyer and as executive director of the Department of City Planning. He was also the founding president of the New York City Economic Development Corporation, the head of the Lower Manhattan Development Corporation and the founding President of the Alliance for Downtown New York, where he helped lead 9/11 recovery efforts.

“For 35 years, he has helped to revitalize and shape neighborhoods across this city,” he said.

Mr. de Blasio also credited Mr. Weisbrod, who will be tasked with expanding affordable housing, among other initiatives, for transforming Times Square from the international capital of the sex trade to its current controversial state of Disneyfication–praising the tourist mecca as “an area that all New Yorkers could enjoy and could be a foundation for the redevelopment of our city.”

“If I had given you a picture of today’s 42nd Street and said this guy Carl’s going to make it look like that one day, I would have asked you what you were smoking,” said the mayor. “Carl took a situation that was entrenched, that was unfortunately a New York City urban myth of the worst kind, and recognized that it could turn into a tremendous economic engine for the city.”

For his part, Mr. Weisbrod seemed reluctant to be standing in the spotlight.

“I always aspire to be Nat Leventhal and not Dick Cheney, so I’m a little surprised to see myself up here, to be honest with you,” he said.

“Carl made it abundantly clear his goal was not to return to public service. He had been there and done that in many ways very wonderfully. But underneath it all, I kept thinking that maybe the moment would come when I could tempt him back for the good of all of us. And this today is a great step forward for this administration,” Mr. de Blasio added.

Mr. de Blasio had originally suggested members of his transition team would not be appointed to the administration, but has made several exceptions. Asked today whether Mr. Weisbrod had  any role in his own appointment, Mr. de Blasio balked.

“Mr. Weisbrod had absolutely, positively no role in submitting his own name. He was slightly aghast when I forcibly submitted his own name,” he said. “There just was no one comparable in all of New York, I would say bluntly no one in all the United States comparable for this role.”

“So even though it wasn’t in his plan, it was in my plan,” he added smiling. “A little persuasion. I didn’t get physical, it was all high very high road.”

Updated at 5:05 p.m. with details from the press conference. 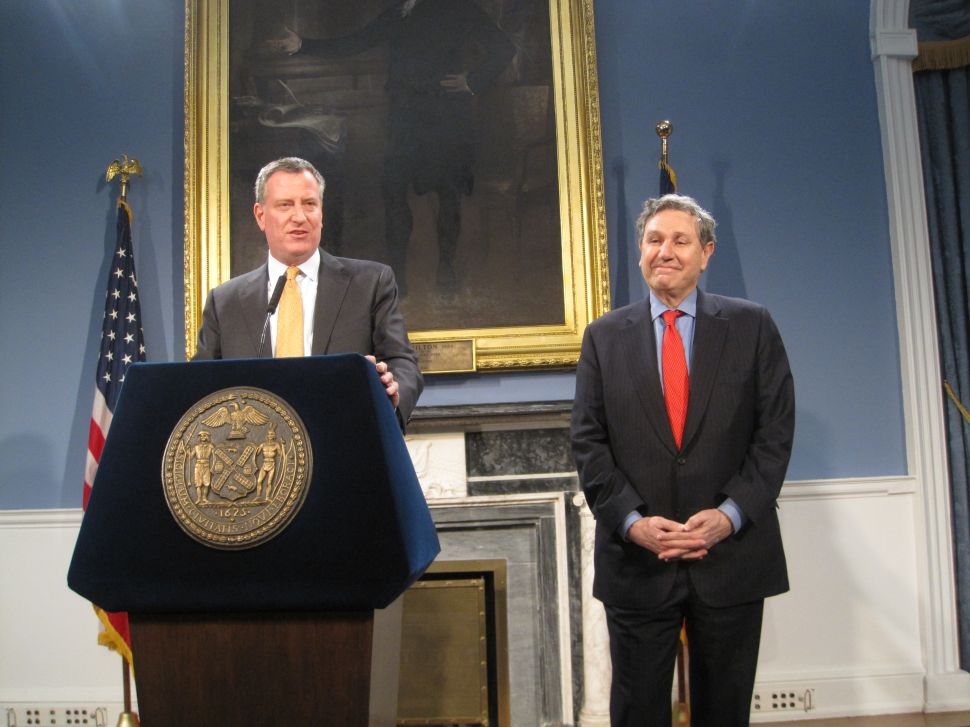