Bill de Blasio slammed the New York Times this afternoon for its front-page profile of John Doherty, which suggested the new mayor snubbed the long-standing sanitation commissioner at a press conference yesterday.

Just before he proceeded with off topic questions at an unrelated press conference in the Bronx, Mr. de Blasio launched into an unprompted criticism of the “patently inaccurate” report, which said “the commissioner’s name went conspicuously unmentioned” when Mr. de Blasio thanked his team at a storm briefing the day before.

According to the administration’s video of the press conference, Mr. de Blasio did acknowledge Mr. Doherty, along with his fire and Office of Emergency Management commissioners, as he kicked off yesterday’s event. Mr. de Blasio later said, “The city agencies have responded I think with great energy and great effectiveness. I want to thank all the leaders here today.”

At various other times during the event, Mr. de Blasio specifically thanked other staffers, including First Deputy Mayor Tony Shorris and Schools Chancellor Carmen Fariña, but not Mr. Doherty.

Though the alleged snub was just one small part of the Times report–which detailed the criticisms Mr. Doherty received following the year’s second snowstorm–Mr. de Blasio was clearly unsatisfied, addressing reporters as “my dear friends” as he chided the media writ-large.

“I just want to say very clearly: The story in the New York Times today was patently inaccurate,” began the mayor. “I have immense respect for John Doherty. I asked John Doherty to stay on to help this city. I think it was a selfless act on his part … He has served with great distinction for many years and he continues to.”

“We will all have our moments along the way, my dear friends,” Mr. de Blasio continued. “And we will have our agreements and our disagreements. But I do ask you for accuracy. If you ever want to check the facts, we’re really available: Phil Walzak and a lot of other people. But don’t tell me what I said and didn’t say in a case like this. I acknowledged John Doherty up front in that press conference. I praised the work of all the agencies present.”

“So any effort to put down a good public servant who’s doing his job with inaccurate reporting, I reject. I just want to make that clear,” he concluded. “With that, we welcome off topic questions.”

Update (5:16 p.m.): Reached for comment, a Times spokesperson said the company stood by their story:

“We stand by our story. As you note, our story reads, ‘When it came time for Mr. de Blasio to thank his team, the commissioner’s name went conspicuously unmentioned.’ Mr. de Blasio mentioned Sanitation Commissioner John Doherty when he introduced those on stage with him. However, when Mr. de Blasio thanked members of his team by name, he did not include Commissioner Doherty. We would also like to note that we have received no request for a correction from the administration.” 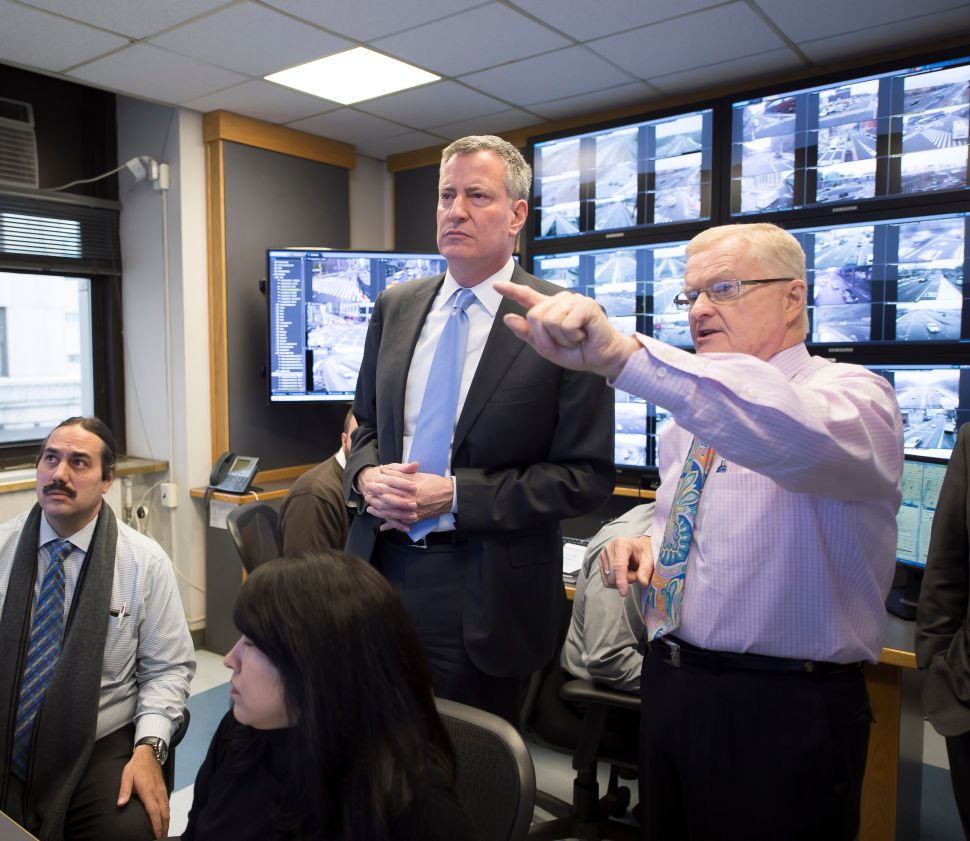