Reflecting on his first Groundhog Day as mayor, which featured Staten Island Chuck, the big city counterpart to Punxsutawney Phil, squirming from his arms and nearly escaping, Mr. de Blasio today jokingly compared the experience to that of Denver Broncos quarterback Peyton Manning, whose team was overwhelmed in Sunday night’s Super Bowl game.

“That is a feisty groundhog there! Let me tell you,” replied Mr. de Blasio, labeling the prognosticating ground squirrel a very “active animal.”

“He didn’t bite me at least,” he added. “I had him for a while and then he squirmed out. And we got him back. But obviously I know how Peyton Manning feels at this point.” (The mayor was rooting for the Seattle Seahawks, it should be noted.)

After Mr. Lehrer let out an audible “oooh” at the Manning crack, the conversation turned today’s snowstorm–perhaps foreshadowed by Staten Island Chuck’s prediction of six more weeks of winter yesterday.

“We have gone very aggressively at the storm,” vowed Mr. de Blasio, who said more snow is expected later this week. 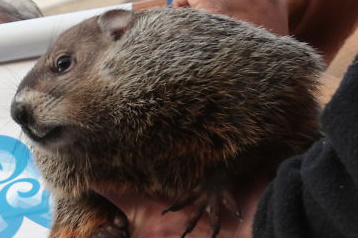