Bill de Blasio has yet to say when he will make the move to Gracie Mansion official, but when he does, the mayor will give up one of his signature displays of everyman appeal: shoveling his own sidewalk.

Mr. de Blasio, who has been spotted and photographed shoveling snow in front of his three-story Park Slope row house repeatedly this winter, shared his thoughts on the matter during yet another storm briefing today at City Hall.

At the now-frequent press conferences updating the public about incoming snow storms and the city’s responses, the mayor often likes to mention–unprompted–that he shoveled his own snow that morning, providing a contrast with Michael Bloomberg, Mr. de Blasio’s billionaire predecessor. That tradition continued today.

“This current house we bought 14 years ago, I’ve been shoveling it out every winter so it’s nothing new for me,” Mr. de Blasio said when asked whether the constant snowfall  had increase his temptation to move to the official mayoral residence on the Upper East Side. “I went to the gym this morning before shoveling thinking I would warm up for shoveling. I want to advise people that going to the gym before shoveling is not always a good idea because this was much heavier snow than I expected.”

Mr. de Blasio nevertheless refused against to drop hints about when he will make his move to Gracie Mansion official.

“Look, I love my house, I love my neighborhood. We’ve made a decision to go to Gracie but it’s gonna take time to put that move together, so when we get there, we get there,” he said. 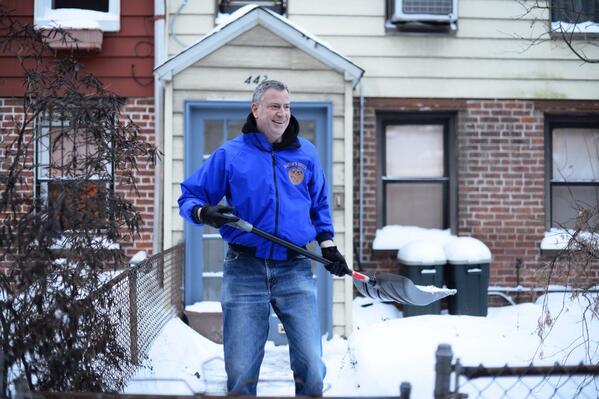