He dropped the furball.

Mayor Bill de Blasio had some trouble this morning with his first official Groundhog Day ceremony, as the skittish Staten Island Chuck squirmed out of his arms mid weather-reading, sending the critter barreling towards a wooden pointed fence and earning gasps from the crowd.

Chuck fortunately landed safely within his pen at the Staten Island Zoo, and predicted six more weeks of winter.

“Chuck and my predecessor didn’t always get along, let’s be honest about that. But I’m hoping we can start a new day, a new relationship here,” said Mr. de Blasio before the encounter. “I’m reaching out a hand to chuck and I hope he will consider shaking it rather than doing other things.”

Public Advocate Tish James had some more hard-knock advice. “Tish and I are from Brooklyn. And she said, ‘In Brooklyn we bite back.’ So Chuck has been forewarned,” he quipped.

“And now with trepidation, I step forward,” he said before approaching the pen and attempting to collect the groundhog, who had to be coaxed out of his house by a zookeeper and passed over to the mayor. But Mr. de Blasio never quite caught his grip, allowing the squirming marmot to make his way to the ground. (“For a moment I thought Chuck was going to predict an early fall,” offered Deputy Borough President Ed Burke.)

But a zookeeper quickly scooped Chuck up again and passed him back to the mayor, who held the critter tightly in his arms, posing for photos as the zoo staff determined the shadow result.

“We’re making peace. We’re making peace here. We’re all getting along. It’s all good Chuck,” Mr. de Blasio said as he gingerly held the animal. “Now Chuck, what about this winter thing, Chuck? We can work something out, can’t we?”

But the results called for more six more weeks of winter instead of early spring.

Update (12:24 p.m.): Mr. de Blasio reflected on the fumble later this morning after meeting with local officials and residents at a diner in Staten Island.

“Staten Island Chuck was very rowdy this morning, I’d like to stay,” said a chuckling Mr. de Blasio, who noted that this was the first Groundhog Day in memory to coincide with the Super Bowl.

“I think that was Staten Island Chuck doing his Marshawn Lynch impression,” he continued, referring to the Seattle Seahawks’ star running back. “I got a hand on him, he swerved out of the way. Very impressive. But once he calmed down, I found him to be a very friendly and very appealing young animal.” 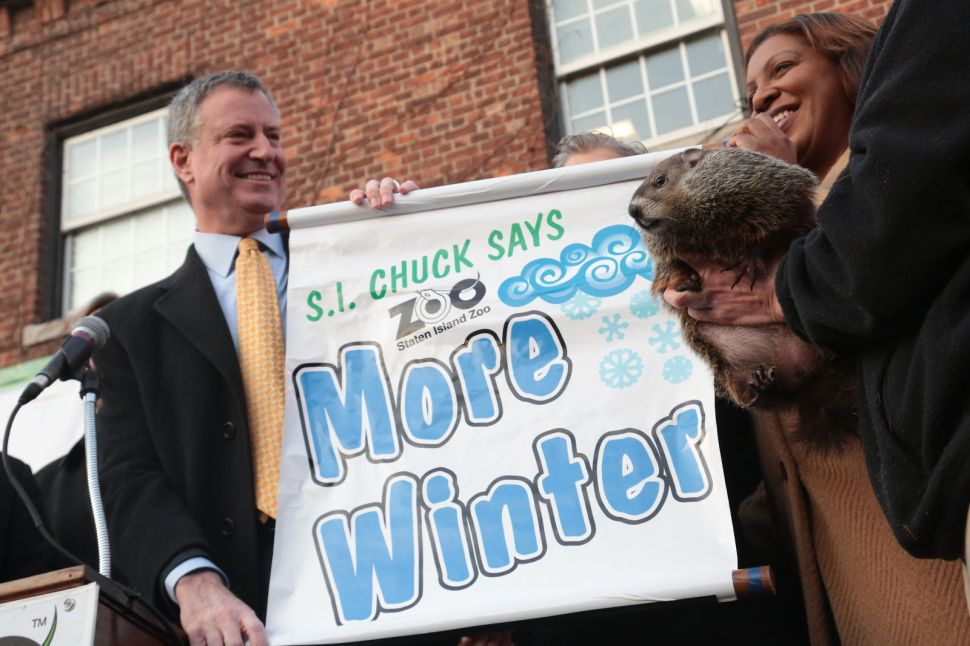