Mayor Bill de Blasio quietly met with GOP State Senator Marty Golden this morning, sharing a breakfast but declining to reveal publicly what the secret sit-down was about.

“It was a breakfast meeting. A private meeting, that’s about it. We were catching up,” Mr. Golden told Politicker, adding that Mr. de Blasio requested the meeting. “That’s all I can really say.”

News of the meeting leaked after Mr. Golden posted a picture of himself and Mr. de Blasio at a Bay Ridge diner this morning. Mr. Golden, however, said that the tweet was not intended for the public.

“You know what, that’s exactly what I asked my staff,” Mr. Golden said when asked why a supposedly private meeting was acknowledged on Twitter. “It should not have gone up. But it did.”

Mr. Golden did say the meeting lasted less than hour, noting he had a relationship with the mayor since they served together a decade ago as fellow Brooklyn City Council members. At least some sources in the district told Politicker the meeting likely concerned Mr. de Blasio’s signature proposal: a tax hike on the city’s high income earners to fund universal prekindergarten. Any income tax hike must be approved by the state legislature, where Mr. Golden holds outsize influence as one of only two GOP members in the five boroughs.

Mr. Golden was not the only Republican Mr. de Blasio, a Democrat, met with today: The mayor also attended a meeting with Staten Island Borough President Jimmy Oddo on Hurricane Sandy relief. When asked why Mr. Oddo’s closed-press meeting was on Mr. de Blasio’s public schedule but Mr. Golden’s was not, a de Blasio spokesman said it had to do simply with the size of the event.

“BP Oddo event is a formal round-table with a wide array of elected officials and staff participating, followed by a media availability,” said Wiley Norvell, a spokesman for Mr. de Blasio, in an email. “That is very different from a 1-on-1 meeting.

Mr. de Blasio last month vowed to be more transparent after being criticized for secretly giving a speech to a pro-Israel group. 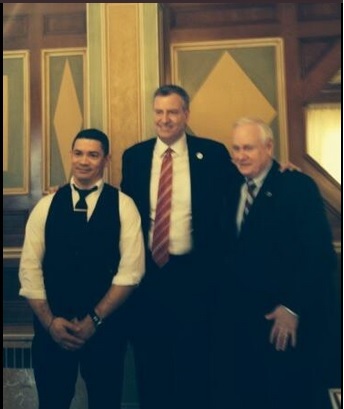