Mayor Bill de Blasio welcomed about 200 supporters to Gracie Mansion last night to urge them to do all they can to push his plan to raise taxes on the city’s richest residents to fund universal pre-K.

Members of the crowd, which included the Rev. Al Sharpton and other prominent clergy members, as well as labor leaders, developers, education activists and administration officials, were asked to get their friends and colleagues involved in pushing the “UPKNYC” plan to reticent Albany lawmakers, according to those in attendance.

“The next four weeks will be critical to finishing the job,” he told those gathered, according to prepared remarks released by his office. “When we win – and we will win – you’re the people who’ll have made it happen. And your victory will be a victory for the children, and the future, of New York City.”

Albany lawmakers have until April 1 to pass an on-time budget plan.

The event was yet another sign that Mr. de Blasio’s approach is very different from his recent predecessors’.  At the reception, members of UPKNYC, the nonprofit founded by Mr. de Blasio’s former campaign manager to push the mayor’s plan, asked those in attendance to fill out forms that asked them to “Commitment to Action” by checking options that included, “Call My Legislator,” “Write My Legislator,” “Send Tweets in Support of UPKNYC” and “Sign Up 5 Colleagues to become UPKNYC supporters.”

“Every one of us who cares about children needs to be out there speaking to our legislators, going to Albany, calling them up and telling them this is important, that the children of this city need this,” explained Jennifer James Austin, the co-chair of Mr. de Blasio’s transition committee, after the event.

“We need to be talking to our friends and letting them know how important this is; to our colleagues,” she added. “We just need to be spreading the word.”

Mr. de Blasio’s plan, of course, faces an uphill battle in Albany, where Gov. Andrew Cuomo is pushing his own, competing plan to fund expanded pre-K statewide using existing budget money. Many advocates and the mayor argue the sum is too small and isn’t stable enough.

But that wasn’t enough to dissuade those in attendance.

“I’m confident it’s going to happen and it’s the political will that it will happen,” said Andrea Anthony, of the Daycare Council of New York, who insisted that high-income earners in the city are willing to chip in a little more.

“It was an organizing event for UPK, to bring us all together, to work together, to strengthen the advocacy efforts that we’re all doing to make it a reality,” she said of the meeting. “He’s trying to build a foundation for our future.”

Jona Rechnitz, another supporter of the plan, said that he was eager to do all he could to make it a reality.

“The message first of all was to thank us for all of our efforts and it was to jump on the bandwagon, come help, speak to people, get five volunteers to come help lobby,” said the self-identified Republican, who expressed skepticism with the governor’s counter-offer.

“If the governor wants to find the funding, I’m sure the mayor will be happy to accept it,” he said, describing the governor’s current budget as unrealistic.

Pastor A.R. Bernard added that the aim of the event was “to galvanize as many influential voices around the initiative of universal pre-K, to stress the importance of it and to make it clear that this is a fight he’s willing to take as far as he can.”

But he said that, in the end, he was open to Mr. Cuomo’s funding scheme “if it works.”

“I think the biggest issue for some is how it’s going to be paid for. And that’s debatable, you know. That’s open for discussion.” he said, cautioning, however, that “money doesn’t drop out of the sky.” 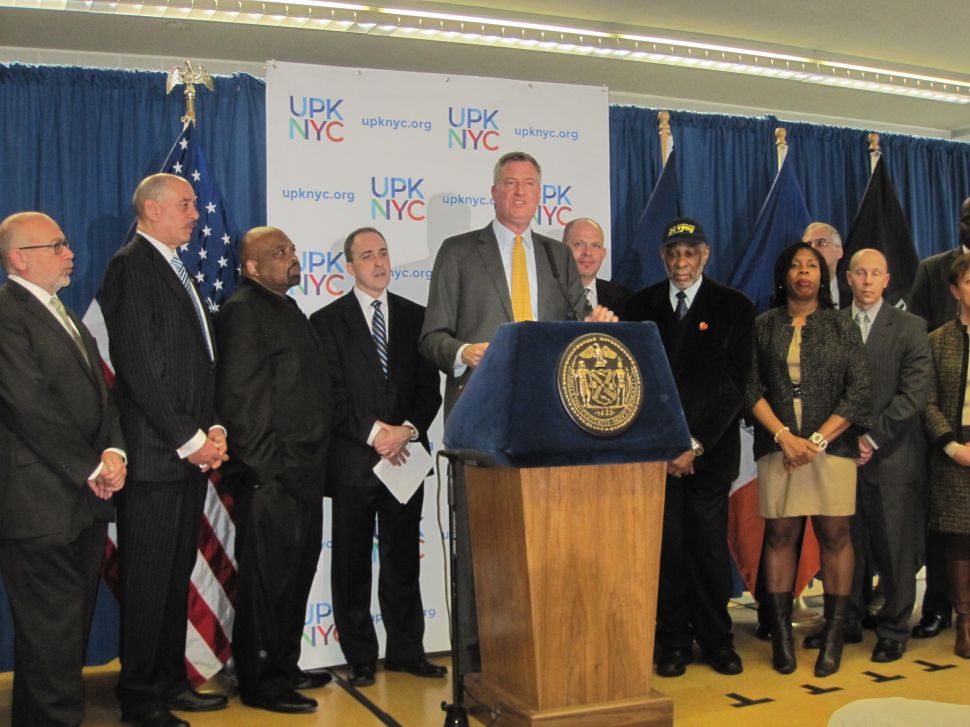