One little-publicized perk of visiting the 138th Westminster Kennel Club Dog Show is the opportunity to hear the word “bitch” used in myriad new contexts. Since 1877, the show, named after a shuttered Manhattan hotel, has the distinction of being one of only four events to be held in all four iterations of Madison Square Garden. The Westminster Kennel Club brags on their website that their dog show is older than the light bulb, the automobile and the zipper.

When not competing at the Garden, the dogs cooled their heels at Pier 94, where The Observer arrived yesterday, bravely disregarding our allergies, to a chorus of barking. Though the aisles were loosely organized by breed, the dogs wandering around, often in pairs, gave the space the feel of a canine-only Noah’s Ark.

Patty, whose greyhound Brianna stayed close by her side, told us that her dog had been winning competitions for several years. So she’s a champion, we asked?

“Oh yeah, a grand champion, actually.” We regretted the error. Brianna, who gazed searchingly around the room and was uninterested in our tentative pats, was hungry, Patty explained, because she had only had half of her usual portion of food that day. Duly impressed by Brianna’s pageant queen bona fides, we moved on. Paris, a magnificent snowy white poodle, caught our eye next. We had to ask — what was the reaction to Paris in the real world?

“You get a lot of different reactions — some people are like ‘Oh my god, she’s gorgeous,’ and some say ‘What is that?’” Her owner Lizzie informed us that when she eventually retired, which “for bitches is about 4 or 5 years old,” her hairstyle would change from her rather Elizabethan topknot to a style called “scissored lamb.” And what would that look like, we inquired delicately?

“…She’ll look like a little lamb.” We’ll take her word for it. Fiesta, a Yorkshire terrier reclining on a table wearing gold lamé pajamas and wrapped in a red blanket, had a similarly elaborate coiffure. A red bow perched on top of her head, while on either side of her snout her fur hung in two long tails.

“Anyone who says they’re allergic to a Yorkie is lying,” her owner declared. Fiesta’s fur was more similar to a human’s than to another dog’s, she explained, reaching out to touch our own hair. We quickly made our way to Chloe, an exhausted-looking pug who sat on her table with an air of resignation.

“She was select bitch today,” her owner told us proudly, an award given out following Best of Breed and Best of Opposite Sex, which was apparently familiar territory for Chloe, as she had been “the number one bitch in the country two years in a row.” Despite these accolades, Chloe wasn’t much of a diva, though she couldn’t be roused to give a high five until snacks entered the picture.

Though every owner we met was uniformly proud of their pups, they couldn’t all be champions. Several of the dogs we met had failed to win any distinction in the competition, but the mood at Pier 94 was cheerful. The dogs probably didn’t care either way.

Finally, we were feeling brave enough to approach the owners of an Irish wolfhound, who stood nearly at eye level with us. Benny was the number one Irish wolfhound male in the country, which may have gone to his head, as he apparently had a penchant for lobster. At this point we had begun to wrestle with the knowledge that most of these dogs lived better lives than we did. What did Benny like to do in his off hours?

“He likes to breed bitches!” 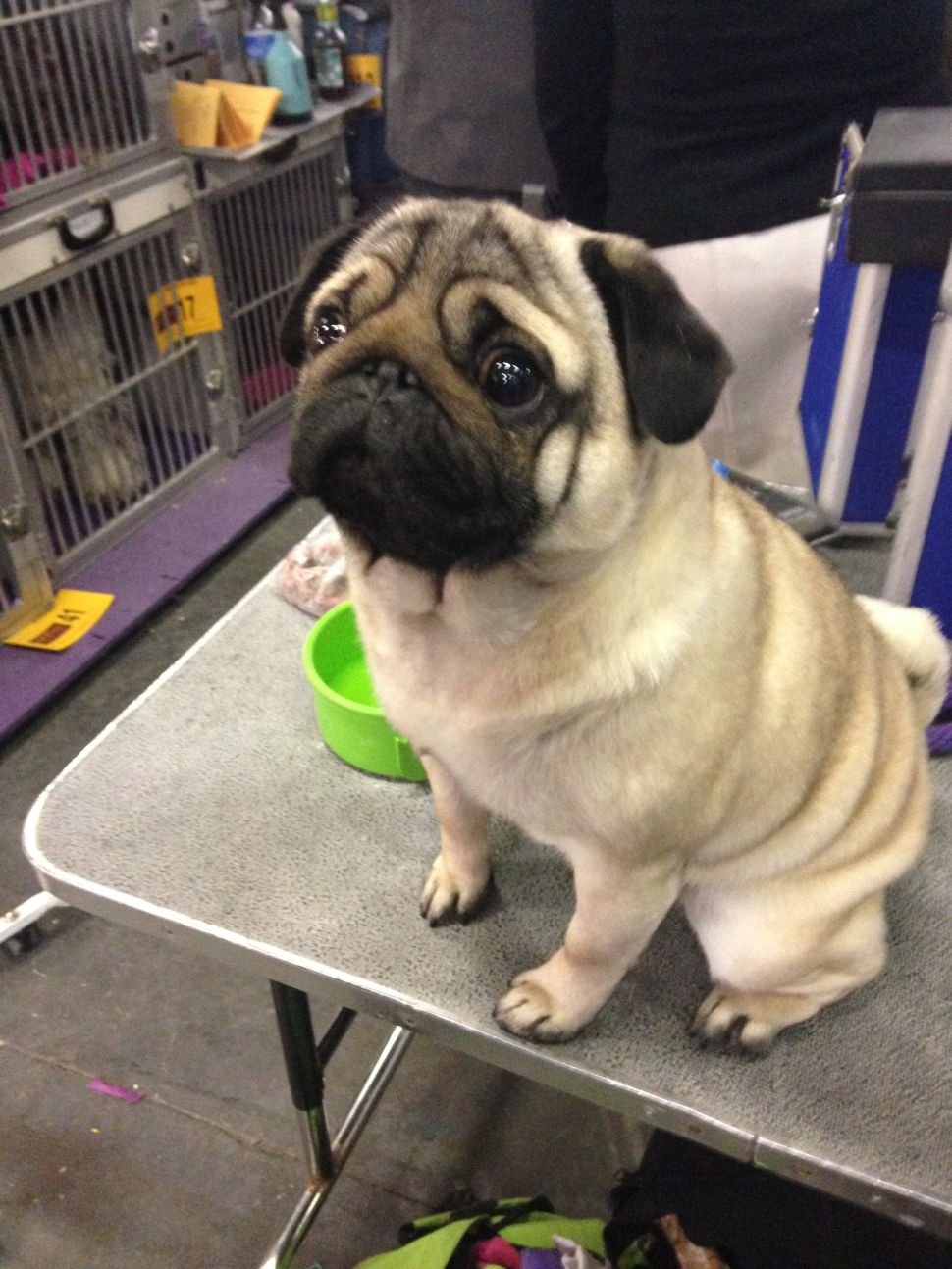