She may have partnered with Bill de Blasio to launch his ambitious “Vision Zero” plan to reduce traffic speeds and pedestrian fatalities, but don’t except Department of Transportation Commissioner Polly Trottenberg to slam the mayor on his recent traffic violations controversy.

“The NYPD put out a statement about that–obviously they’re the ones who handle the mayor’s travel and his security detail,” she said during an interview on WNYC’s Brian Lehrer Show. “I would say this: I’ve been on the job now, not even a month, and having the opportunity to see the kind of leadership that Mayor de Blasio wants to put into Vision Zero and making our streets safer–I’m very inspired by it.”

However, pressed on the specifics of police and emergency vehicles driving in non-emergency situations, Ms. Trottenberg hinted broadly that all “public officials” will need to be cautious as they drive across the five boroughs.

“Again, I sort of have to defer to the NYPD on that,” she reiterated. “They’re the ones that are handling security and emergencies. But I think all of us are going to take a look at how, as we’re traveling around the city, we’re going to do it as safely as possible–public officials and the public alike.”

Outside of his house today, Mr. de Blasio himself also dodged the issue, which first arose in a CBS 2 report yesterday evening.

“I gotta go to the gym,” the mayor told PIX 11. “The NYPD provides security protocol for the drivers. Talk to them about that.” 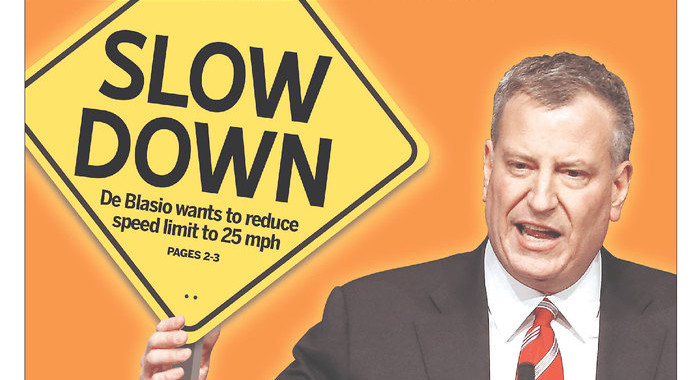