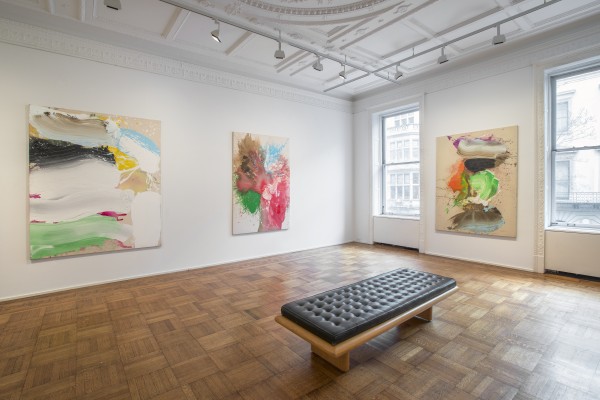 Mr. Clark’s work  has only been seen piecemeal lately. Age 87, he fought in World War II, was a habitué of the Cedar Bar favored by fellow Abstract Expressionists and was part of that generation of African-American artists who decamped for more-accepting Paris in the 1950s for five years. This is his first solo show in New York in eight years. His canvases have the churning energy of de Kooning and in the lone older work here—1959’s Winter Bitch—the knifing black strokes of Franz Kline (plus orange, blue and pink sneaking in from one corner), but there are also hints of the more stolid contemporary French painters, like Nicolas de Staël, an enduring influence.

Mr. Clark works with his raw canvases on the floor, and his trademark move is to push swells of paint across them. He’s an ace with white, a tricky-to-animate color; it looks just barely dry. He also speckles on little mounds of paint like it’s wet earth and stains his paintings, with what could be pink lemonade in a gorgeous untitled number from 2009, and splatters atop them, in New Orleans Series #5 (2012), with what appear to be phosphorescent blueberry- and strawberry-vanilla milkshakes (they’re reminiscent of Mr. Hammons’ own drawings made with Kool-Aid). This multiplicity of techniques aligns Mr. Clark with some of today’s finest painters, like Laura Owens, who uses a grab bag of (very different) techniques to make works that glow with competing strategies. A few Clarks here don’t quite work—they look a touch too slapdash, a bit kitschy—but the good ones are paragons of immediate, in-the-moment painting.

Mr. Hammons has also included a piece each from some of Mr. Clark’s other superstar friends, like the minimalist Donald Judd (who gave the artist a 1971 show at his Spring Street loft), the Ab-Ex painter Joan Mitchell (he lived with her in France for about a year in the late ‘60s) and the Japanese artist Yayoi Kusama, offering a hint of the broader communities that fade from view as art history makes its parsimonious selections. He has situated these just around corners so, walking through the show, you first see Mr. Clark’s works and then, say, a Kusama painting—an elegant reversal of the reception that has greeted his work until now.