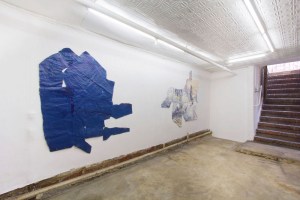 Young artist-run galleries are on the move.

After showing work by a number of promising artists for the past year and a half in one of Manhattan’s smaller spaces (and also one of the trickier to spot from the street—it was in a Lower East Side basement), artist and art dealer Eli Ping is moving a few blocks southeast. In March, he plans to open in a larger, second-floor space in 55–59 Chrystie Street, the building that Canada gallery made famous and occupied until last year, when it decamped for larger digs on Broome Street. (Frances Perkins will also become a name partner, making the full gallery name Eli Ping Frances Perkins.) Brooklyn upstarts 247365, who have also been showing the work of emerging artists, in Carroll Gardens’ Donut District, since November of 2012, will take over Mr. Ping’s old location, running it as a second, satellite gallery.

“The gallery in the basement was 200 square feet,” Mr. Ping told us, of the 131 Eldridge Street space, where he did shows with Ben Morgan-Cleveland, Mariah Dekkenga, Elizabeth Jaeger and others. “It was a great place for us to start, but the new space is 1,000 feet.” About 700 square feet in the new location will be exhibition space. Another bonus: The new Eli Ping Frances Perkins will have a good 100 feet of linear drywall versus only about 6 in the old space. (The last show there, a handsome, austere video piece by duo Steinman and Tear, closed on Sunday.)

First up on Chrystie Street, opening on March 9, at the tail end of Armory Arts Week, is a one-person show by Rose Marcus, who was also the first artist to have a solo show with Mr. Ping, in September 2012. “I knew you couldn’t do a second solo show in the basement,” Mr. Ping said of the timing. “It had charm but…” Following in April will be a solo outing by Dena Yago.

Jesse Greenberg, who runs 247365 with artist MacGregor Harp, said their Manhattan location will focus on solo shows, with broader curatorial efforts continuing at their Carroll Gardens headquarters. “It might be a place for artists to rattle their audience, and present something a little more unexpected than their recognizable tried and true works,” Mr. Greenberg said.

Those one-person-show plans aside, they’re inaugurating their new Manhattan outpost with a group show, called “If the Shoe Fits Like a Glove,” which will have work by Sebastian Black, Marlous Borm, Miles Huston, Jamian Juliano-Villani, Molly Lowe, Club Paint and Bunny Rogers.” It opens Friday.