A run for the Assembly? Another shot at Congress? The private sector? Something else?

Former Brooklyn Councilman Erik Dilan says he’s looking at all of the above.

“I’m looking at anything and everything. I haven’t closed any of my options at this juncture … I haven’t taken any options off the table,” Mr. Dilan, who was term-limited out of office last year, told Politicker yesterday. “I love being in the elected life and there’s some opportunities in non elected life, both for the public and private sector, and I’m just trying to figure out what path I want to take.”

Mr. Dilan’s most obvious path back to elected office is the Assembly seat recently vacated by now-Councilman Rafael Espinal, observers say. Mr. Espinal, who works closely with Mr. Dilan, won Mr. Dilan’s former council seat last year and insiders say Mr. Dilan would be an overwhelming favorite to win in the Bushwick-based district, particularly if Gov. Andrew Cuomo decides to call a special election. (In a special election, Mr. Dilan and his father, State Senator Martin Dilan, would wield a great deal of influence in the group of Democrats who would select their party’s nominee.)

But Mr. Dilan, who unsuccessfully challenged Congresswoman Nydia Velázquez in 2012, wouldn’t completely discount another run for Congress either. Still, he admitted that with a June primary looming, he would have to make a decision on that front very soon.

“Congress, it is obviously getting a little late for that. Petitions will be out. While it’s something I haven’t taken off the table, it’s looking a little less likely,” he said.

One gig Mr. Dilan was also once reportedly after was the top job at the patronage-heavy Board of Elections. Mr. Dilan lost out on the post last year to Staten Island’s Michael Ryan–a development the chair of the Brooklyn Democratic Party wasn’t happy about. At one point last year, sources said Mr. Dilan was also mulling a bid for Brooklyn borough president. At the time, Mr. Dilan would only tell Politicker he was keeping his options open.

Either way, Mr. Dilan said, he would let the public know about his decision soon.

“A decision whether it’s public office or something else, I would imagine would be made very shortly,” he said. “It’s just for me to make up my mind and feel comfortable with the path that I’m taking.” 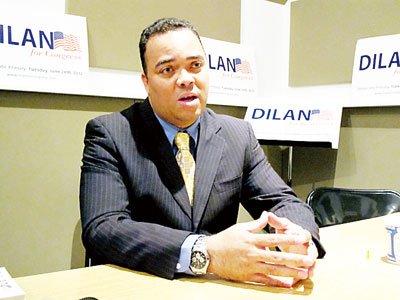