Don’t be fooled by the nice Jewish girl from Brooklyn routine. Greenstein has steamrolled Republican candidates in highly competitive general election races that left the bewildered likes of Tom Goodwin, Richard Kanka and Pete Inverso all asking if anyone got the license plate of the truck that ran over them. In the words of one veteran politico, “Linda ought to teach legislators how to campaign.”

While Greenstein has crafted strategic general election victories in bellwether LD 14, safe Democratic district-schooled Watson Coleman has plied her trade as a party attack dog. What that means is Watson Coleman’s allies won’t have to dig too hard to find campaign videos of Team Greenstein praising partisanship at its best in the case of the Democratic Legislature and Republican Gov. Chris Christie, while Watson Coleman will full court press her record as a fiery progressive.

He’s been running for Congress for years, and actually did run two years ago as a sacrificial lamb candidate against U.S. Rep. Leonard Lance (D-7), in part to set himself up for a run in a Democratic Congressional District. Because of his ability to take a chunk out of the Middlesex suburbs, the whispers are already in overdrive at this point among those operatives exercising that convenient hypothetical: “if Upendra stays in the race,” as though there’s a chance of him leaving. Short of nailing down commitments in concrete and blood that he’ll get U.S. Rep. Frank Pallone’s (D-6) seat in two years if he yields now, it’s unlikely he’s exiting. In fact, a source close to the assemblyman pointed out that he had scheduled a trip to India and was supposed to leave tomorrow. Chivukula canceled it to focus on his congressional race. One operative, who leans Greenstein, said of Chivukula, “He’s out of his mind – unless he’s on a death march.”

Assemblywoman Bonnie Watson Coleman (D-15) displayed key segments of Democratic Party support in her home county of Mercer, home to roughly 57,000 CD 12 Party Primary voters. Look for state Sen. Linda Greenstein (D-14) to lock down Middlesex tomorrow. That’s home to about 55,000 Democratic Primary participants. The collision of Middlesex and Mercer and Chivukula likely able to secure his home county of Somerset (if he stays in, see above), makes Plainfield CD12’s Stalingrad, and puts Assemblyman Jerry Green (D-22) in the unlikely role of Nikita Khrushchev. Two beats one. The county convention is scheduled for March 5th, and the three towns in CD12 – Scotch Plains, Fanwood and Green’s Plainfield – will consider the candidates.

The new Middlesex County Democratic Party chairman wants to make a Lynch-like statement here in support of Greenstein. Part of the chairman’s power projection would include folding Green in as part of a Middlesex-Union alliance. Watch for this. If McCabe is able to keep Green close, it could signal a developing power partnership between the two Central Jersey counties. Ultimately, the race comes down to who controls the lines, as an amped – but disjointed – Newark West Ward Councilman Ronald C. Rice discovered in his 2012 Primary with U.S. Rep. Donald Payne, Jr. (D-10). If McCabe can land Union for Greenstein he will have driven a stake in Mercer. But as it is with Chviukula’s candidacy, that’s a big if. 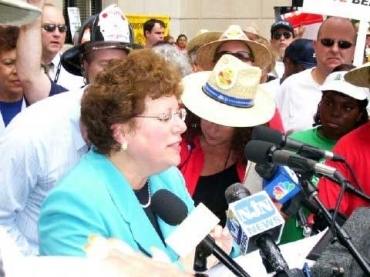