This apartment on the Lower East Side can be yours for $1,400 a month … and the patience to share it with a heartbroken roommate.

“Girlfriend is moving out with some guy named ben… not sure what that’s about, but i can’t afford this place without her[sic],” a recently single Manhattan Resident said in a TMI Cragslist ad.

And! This 440 sq. ft one-bedroom apartment also comes with not one, but two cats.

Yup. one bedroom. But don’t worry, your new roommate has already graciously agreed to take the couch since he “doesn’t sleep much anyway.”

He works from home (deal breaker) but goes out at night for “some shenanigans.” Hmmm.

He says he’s trustworthy and attends classes on occasion.  He also trades in the cigarettes for a vaporizer indoors: “it’s too small, it makes the clothes stink…”

“girlfriend is moving out with some guy named ben… not sure what that’s about, but i can’t afford this place without her… located in the heart of lower east side, across the street from soho and nolita, and east village, and all the goods. apartment is 440 sq ft, i have 2 cats, i’m from california, i work from home, i go out at night, some shinanigans, but trustworthy. You can have the bedroom, i’ll sleep in the living room, i don’t sleep much anyway, i do graphics, attend classes on occasion, and what not. i don’t smoke cigarettes in the house, vaporize only in the apartment, it’s too small, it makes the clothes stink…” 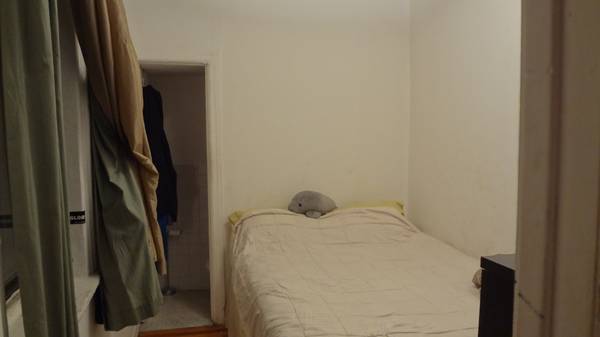