TRENTON – Assemblyman Angel Fuentes (D-5) won’t give any Shermanesque statements about the senate seat in his district right now.

But don’t count out Fuentes, he said moments after Assemblyman Pat Diegnan (D-18) gaveled out the Assembly Education Committee this morning.

Is he ruling out a move up?

“No,” the assemblyman from Camden said, “I’m not ruling it out.” 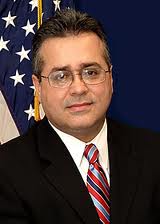