New York is looking less crazy all the time.

We had a mayoral candidate who sexted? Twice? Toronto’s mayor smokes crack and is still in office. Mayor Bill de Blasio eats pizza with a knife and fork? So what? Mayor Rob Ford assured the public on camera that he never told a staffer he wanted to “eat her pussy,” because “he has more than enough to eat at home.”

But New York still has the liveliest book parties.

On Friday night, Gawker threw a party at Nick Denton’s Spring Street loft to celebrate the publication of Crazy Town: The Rob Ford Story, which Toronto Star reporter Robyn Doolittle managed to speed write in just 90 days. Ms. Doolittle was one of the first journalists to report on Toronto’s train wreck of a mayor.

She is also one of only three people who saw the famous video of Mr. Ford smoking crack (Gawker editor John Cook is another). You may recall that after the Toronto Star decided not to spend the $200,000 to buy it from drug dealers, Gawker raised the money via crowd-funding. Gawker succeeded in raising the funds but never got the goods. (One of the perils of trying to buy anything other than drugs from dealers.)

When introducing Ms. Doolittle, Mr. Cook announced that Gawker would be posting the video. An excited murmur buzzed through the room before the crowd quickly realized that Mr. Cook was joking.

Ms. Doolittle thanked Gawker and Mr. Denton for hosting the “lovely” party and offered to take Mr. Denton’s apartment if he ever wanted to offload it.

Over poutine from Mile End (Montreal is close to Toronto, right?), White Castle burgers (an illusion to crack, we think) and a Rob Ford bobblehead, Ms. Doolittle explained how she came to write about Mr. Ford’s substance issues.

The mayor was a chronic no-show at City Hall, so she began scanning Twitter for sightings. Not infrequent reports of him buying an afternoon “mickey” of vodka, Ms. Doolittle recalled, tipped her off that something was awry.

“I totally forgot you guys don’t call it that,” Ms. Doolittle said, explaining that it’s what Canadians call a pocket-size bottle of alcohol. “I should try to remember that Americans have no idea what I’m talking about when I say that,” Ms. Doolittle added, alluding to her upcoming appearance on The Daily Show With Jon Stewart this Thursday. 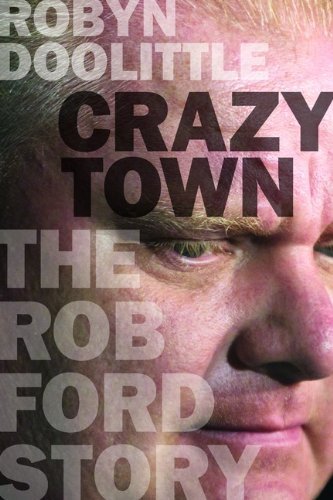