TRENTON – State Senator Linda Greenstein (D-14) countered an attack earlier today by her CD 12 Democratic Primary rival, Assembl ywoman Bonnie Watson Coleman (D-15), as she made the case for her own record as a progressive party leader.

“It’s shameful and disappointing that the former Democratic chair is undermining the integrity and values of our party with an out of the gate character assassination,” said Greenstein, who said the 14th has not afforded her the ability to cocoon herself into a comfort zone.

Calling herself a party builder, former Party Chair Watson Coleman of Ewing this morning panned Greenstein, describing her rival as a follower, not a leader.

Strenuously objecting, Greenstein pointed out that she built the 14th District into a Democratic Party stronghold.

“I was able to take a Republican district and make it Democratic, from the ground up,” said Greenstein, who won election to the senate seat after conquering state Sen. Tom Goodwin (R-14) in 2010.

Republican Pete Inverso won the senate seat in the anti-Florio landslide of 1991. He held it until 2008, when Republican Bill Baroni, now the Bridgegate-tormented former executive director of the Port Authority, took over before handing the seat to fellow party member Goodwin.

Greenstein beat Goodwin, GOP child advocate Richard Kanka in 2011 and a come-backing Inverso last year.  First elected to the legislature in 1999, Greenstein beat an Inverso running mate to land a seat in the Assembly.

The senator said she prides herself on independent leadership. She bucked then-Gov. Jon Corzine on the sales tax when she thought it was right for her district, and she opposed Republican Gov. Chris Christie on every major issue, she noted. “He made it easy for me to oppose him,” she said.

“I have never waffled on a union issue, I’ve made the tough decisions in my district and I am closest to Rush Holt on the issues,” Greenstein said. 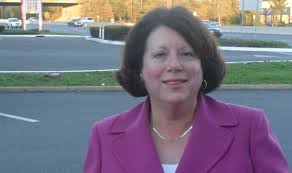