Attention moviegoers! If you have some leftover cash after forking over $14.50 for The Wolf of Wall Street, why not put those pennies toward paying for Jordan Belfort’s crimes?

That’s precisely what Yale professor Ian Ayres felt he should do after enjoying the Scorsese flick so much.

“I felt uneasy because I was taking enjoyment out of something that indirectly derived from harming others,” Mr. Ayres told the Daily News about launching belfortvictimsfund.org. “Producers made $300 million on the movie and they’re giving the court-ordered fund a couple hundred thousand dollars”

Martin Scorsese’s top-grossing movie starring Leonardo DiCaprio, has been criticized for glamorizing the Wolf’s lifestyle. According to federal prosecutors, Mr. Belfort, today a motivational speaker, paid out a mere $10.4 million to his victim, still owing $110 million.

“We have this concept of things like fair trade, so I had a thought that there might be some people who would be more comfortable watching the movie if they could think that victims were also being helped out a little,” Mr. Ayres said. He kicked off the donations with $22, the price of two movie tickets. He’s hoping others will join in and mail checks to the Clerk of the Court Eastern District of New York, where the funds will go directly to the victims.

If you’ve seen The Wolf of Wall Street, you know that the movie literally and figuratively kept the victims of Jordan Belfort’s fraud outside the frame. In only a few scenes do we hear even the disembodied voices of the defrauded investors. But imagine what it would be like to watch the movie in the presence of one of Jordon Belfort’s 1,500 real-life victims—whose ranks, contrary to what the film suggested, included architects, engineers, insurance agents, real estate appraisers, and other middle class professionals.

We are not claiming that movie-goers have a moral duty to remedy the harm done by Belfort. Then again there’s nothing wrong in wanting to share some of the benefit of movie-going with the victims. But just as some consumers embrace the idea of carbon-neutral consumption by buying carbon credits, some moviegoers might think of making a contribution to the victims fund as an “exploitation-neutral” way to consume  The Wolf of Wall Street. If you give a dollar or two you can be fairly confident that a majority of Belfort’s victims would not object to your seeing the movie.

Making a contribution to the victims fund is especially appropriate for moviegoers because it doesn’t seem like much of the film’s revenues are going to help Belfort’s victims. Belfort is under a court order to pay 50% of his gross income towards restitution for his crimes—and he claims that he’s turning over “100% of the profits of both books and the movie.”

But in 2011, when Belfort sold the film rights to The Wolf of Wall Street for over $1 million, the U.S. attorney says that he contributed just $21,000 to the restitution fund. On October 11, 2013, Loretta Lynch, the US attorney for the Eastern District of New York, asked a federal court to hold Belfort in default on his court-ordered obligation to pay 50% of his gross revenue to the fund.

Since its release, The Wolf of Wall Street has earned over $300 million worldwide, becoming Martin Scorsese’s highest-grossing film. But the producers of the film, Red Granite, may have paid as little as $125,000 to the victims’ fund—seemingly under a court order.  In short, buying a ticket to this movie isn’t like buying a bottle of Newman’s Own dressing, where you can rest assured that a non-trivial portion of the profits will go to charity.

The movie repeats Belfort’s claim that his firm only targeted the super-rich. The idea is that we needn’t worry so much about who was hurt by these crimes, because these investors were so wealthy that they wouldn’t be as harmed by losing some money. But some of his victims’ families tell a very different story: “My father lost practically a quarter-million dollars,” said one man, whose father, an engineer, was cold-called at home by a Stratton broker. His father suffered a stroke under the stress of his losses. As one investor puts it: “I’m not a rich guy, and I’ve been paying for it ever since.”

There are many worthy charities to which you could direct your giving. But turning your back on Belfort’s victims simply because they are the “undeserving rich” is buying into what seems to be another one of Belfort’s lies. At the end of the day, there is no moral imperative for moviegoers to offer anything to Belfort’s victims. But by going to movie and taking even a moment’s pleasure from the movie makes us more than passive bystanders. We have a tenuous connection to the victimization.

If you’ve paid money to see The Wolf of Wall Street, consider going exploitation-neutral and donating even a dollar to the Belfort Victims Fund. 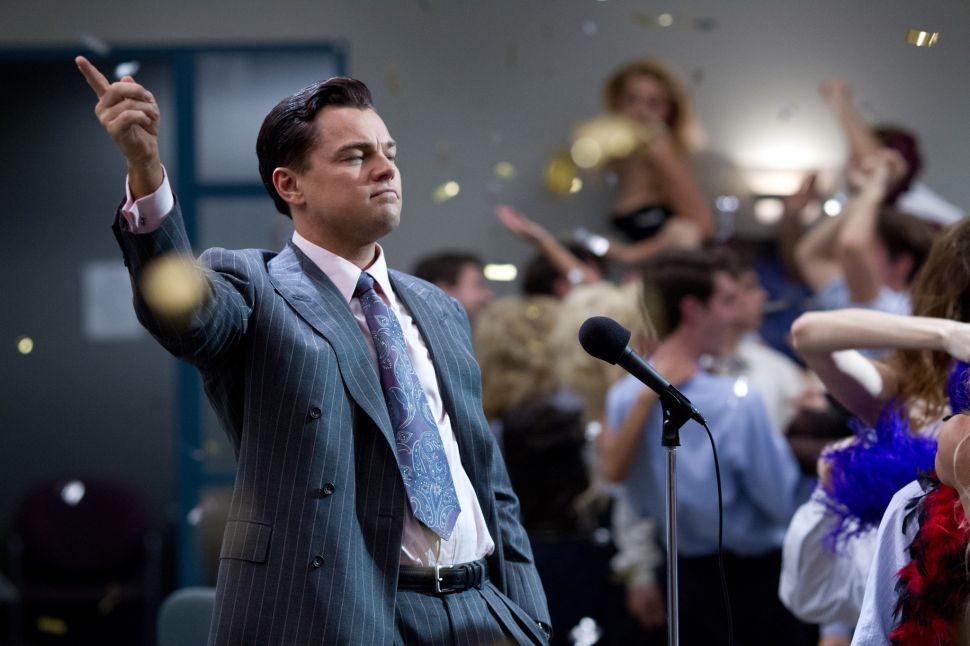