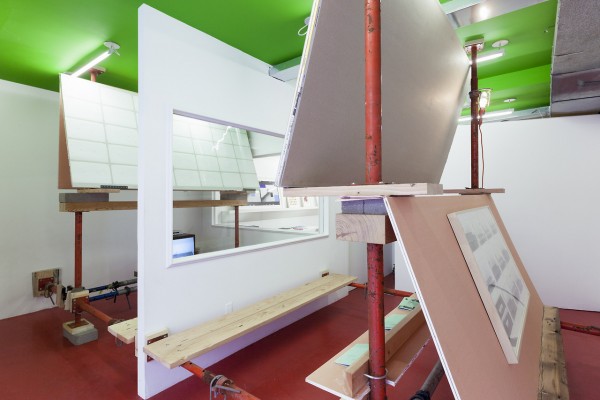 Installation view of ‘Hitting It Off’ at P! (Courtesy P!)

Is there any gallery owner having more fun right now than Prem Krishnamurthy? A graphic designer by trade, he for the past year and a half has been hosting art shows of unknown and unexpected talents in a storefront space with a signature red floor (and now a signature green ceiling, a feng shui expert’s intervention in the last exhibition). P!’s latest show, organized by Mr. Krishnamurthy, Manuela Moscoso and Sarah Demeuse, pairs work from two artists who are relatively obscure in the U.S., the Belgian Philippe Van Snick (born 1946) and the Spanish June Crespo (born 1982). The effect is commendably shambolic—smart in a pleasantly casual way.

Mr. Van Snick’s work, dating from 1972 and ’73, looks like bone-dry early Conceptualism—a black-and-white video and gridded sheets of paper, each listing two numbers. Give it a moment. That video has two friends in the midst of a ping-pong duel, and those papers spell out the score of a match. This is displayed on and around a burly, eat-your-Oscar Tuazon-heart-out architectural installation—it spans the gallery and looks almost like a hunk of machinery—that Ms. Crespo has built from metal scaffolding, cinderblocks, drywall and the odd newspaper to help it fit snuggly. Braced against the walls, it could be pushing apart the room (à la Chris Burden’s 1985 Samson) or holding it together. It also displays her layered collages with vintage nude magazines and transparent prints of luxury-good ads and news stories. They veer uncomfortably close to Josephine Meckseper’s lazier moments, but there’s a humorous, densely packed rawness that makes it work.

Things are under construction and—maybe—falling apart. Games are being played, frivolous (ping-pong) and deadly serious (the objectification of money, in brands, and bodies). But wait, there’s a final component—a few copies of a little pamphlet that the show’s three organizers compiled as a response to a reading group they were in devoted to the fashionable philosophy known as speculative realism. It’s a modest, playful object, laid out on Ms. Crespo’s shelf in case you’re curious: Take it or leave it. Like so much that gets shown at P!, it’s just another invitation to a weird wormhole that you can journey down as far as you like.

Update, 2:45 p.m.: An earlier version of this post misstated that Mr. Van Snick appears in the ping-pong film. In fact, it is two of the artist’s friends.