From the moment that you RSVP to the Mark & Estel show on the first Thursday of Fashion Week, worry that they sent you the invitation by mistake, that you don’t actually have a reserved seat, and that you entered the wrong start time in your Google Calendar. Fashion is not your beat, but after a few years of holding various jobs in media, you’re used to pitching in.

On the day of the show, make sure that you are definitely late — the kind of late you see in romantic comedies where the heroine races across town in a cab to save the day. Curse your cab driver for being more deferential to the laws of traffic and physics than the ones in the movies. Be sure to go to the wrong entrance first, five minutes before the show is supposed to begin. This will make things very exciting! Slip and slide your way across the icy sidewalk, careening around people loading empty clothing racks into vans and breaking into a bit of a run when you think no one is looking.

Once inside the correct entrance to the Salon at Lincoln Center, survey the lounge filled with people nursing beers and typing away on laptops. Note their lack of urgency, and feel like an idiot for running. You forgot that nothing starts on time. No fewer than three super over it security guards will direct you toward the entrance to the show, where you will join everyone else waiting to take their seats. Of three things you can be certain: you will recognize no one, the sock buns will be high, and the glances will be appraising.

Behind you, people will hold forth on how Fashion Week used to be. Everyone will look like Kendall Jenner but be dressed like Kylie, in dark leather, velvet and fur. Behind you, girls in matching red lipstick and wavy hair will agree with one another about how once you get up further into merchandising you can get more into planning, but until then, it sucks. They will talk about how Campbell from their office is on a crusade to get rid of bagel day. You will ponder this act of evil for the next half hour.

Finally, you will be ushered into the show room, where you will look for your section and row number.

“Is this the line for sitting or standing?” Someone will ask you.

You will eventually find your seat, though there will be confusion as to whether the row numbers start on the right or the left. You will gingerly pick up the gift bag on your seat (containing dry shampoo, nail polish and a bottle opener) and put it in your purse, wondering if that’s the proper protocol. Like magic, a staff member will come over and ask you and your seat-mates if you could “leave everything where it is.” Since you are the type of person to marinate in shame for hours if someone tells you you’re standing in the wrong spot, this will come as a devastating blow.

Mark and Estel will begin to walk down the runway, singing lyrics you can’t decipher. Mark will finally be able to wail on his guitar. You will panic trying to figure out what the appropriate reaction to this ought to be. The only words you will be able to make out are “Forward to the old world.”

You will exit in front of an older man in a velvet coat, who will say to his companion, “I just…I am disturbed by that.”

“I thought nothing could top Betsey Johnson’s cartwheels, but Mark and Estel…and their rap song! Oh my stars, I’ll buy something just because of that.” You’ll laugh and agree.

“Byeeee,” his companion will say to your departing back. It will sound a little sarcastic to you. 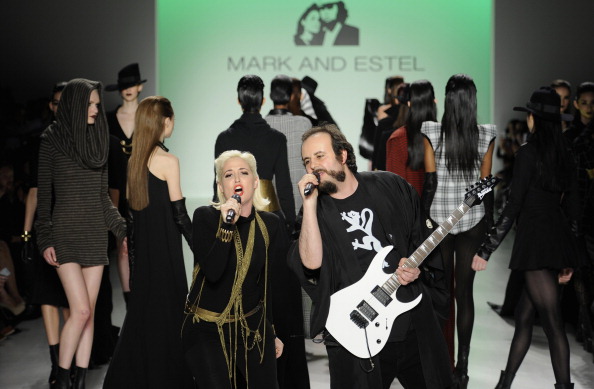