The next time you breakfast at Tiffany’s, put down your Danish, and take a look at the display of intense, smoky blue diamond rings on the second floor. Gone are the peppy pastels and yellow stones that accompanied Gatsby last spring. It’s winter, it’s cold, and when it comes to jewelry, the mood is decidedly dark.

And it’s not just fashion-forward editors showing off their Wendy Brandes memento mori-inspired skulls and stabbed heart rings on Instagram, though a piece of the wittily subversive designer’s remains an essential for anyone who disdains the cutesy. It’s everyone.

Anyone shopping engagement rings at the Williamsburg jewelry boutique Catbird would see, amid the traditional white diamond solitaires, a newfound plethora of darker options: inky blue sapphires and deeply colored rubies. Perhaps most exciting are the diamonds in formerly little-known shades like black, smoky gray and the light brown marketed as “champagne,” from designers, including Polly Wales, Satomi Kawakita and Lauren Wolf.

“Not everyone wants a big, white, honking stone,” says Leigh Plessner, the store’s buyer and general manager. “We definitely see people looking for a subtler, darker, more mysterious alternative. It used to be that one would have to really spell out that a gorgeous ring with a darker ston, or a ring that does not read conventionally as an engagement ring with a solitaire could be an engagement ring. That is no longer the case. There’s more of an intuitive reaction, an understanding that one should seek the ring that speaks to you.”

Of course, colored stones have a long history in fine jewelry, including engagement rings. White diamonds only became considered the engagement ring standard in the middle of the 20th century, after the De Beers cartel waged a long marketing campaign involving Hollywood product placement, the invention of the one month’s salary rule (later upped to two, then three) and the coining of the tagline “a diamond is forever.” In the Victorian era, engagement rings were often sapphires, garnets or pearls, sometimes with diamond accents. And prior to advances in saw technology in the 15th century, diamond cutters could not cut stones to reveal their brilliance. For most of human history, diamonds therefore appeared black, and they are depicted as black in portraiture until the middle of the Renaissance. Dark diamonds are in that respect the original diamonds.

And darker stones are appearing in nonmatrimonial jewelry, too. Catbird is known as the originator of the “stacked” ring look, where customers wear many delicate bands, mixing metals and stones according to individual whim. Ms. Plessner says the store’s own Fairy Light eternity band with black diamonds set in 14k gold ($,1200) has been a hit with customers recently, because it adds drama to a stack. “I think that the finer the piece, the more luminous a darker stone can look,” says Ms. Plessner.

Jewelry designer Alice Waese, 30, often uses rough diamonds in her work. Uncut diamonds appear gray or black, because they haven’t been faceted and polished, giving Ms. Waese’s pieces a solmen feel. “I love that they are often a byproduct of the industry. They’re used to cut the other diamonds and then cast away. They’re the outcast diamonds.”

And like many outcasts, sometimes they’re just plain more interesting than their peers.

No two are alike. Ms. Waese finds them “so much more subtle and natural than polished diamonds. To me, they seem more precious, more rare. They’re actually harder to find then cut diamonds, so in a sense they are in fact more precious,” she notes. “The dealers always look at you like a crazy person when you ask for them.” Customers don’t seem to find them crazy at all. One of Alice Waese’s popular carved sterling silver ring set with a rough diamond will set you back $4,000.

“Each piece is slightly different, slightly flawed, carrying the mark of the maker,” Ms. Waese says. “I think it also appeals to the market at large. People are moving away from mass production and are intrigued by things that seem unique and handmade, and reflect nature.”

Because if diamonds are forever, then you really don’t want to be stuck with the same dull kind everyone else has. 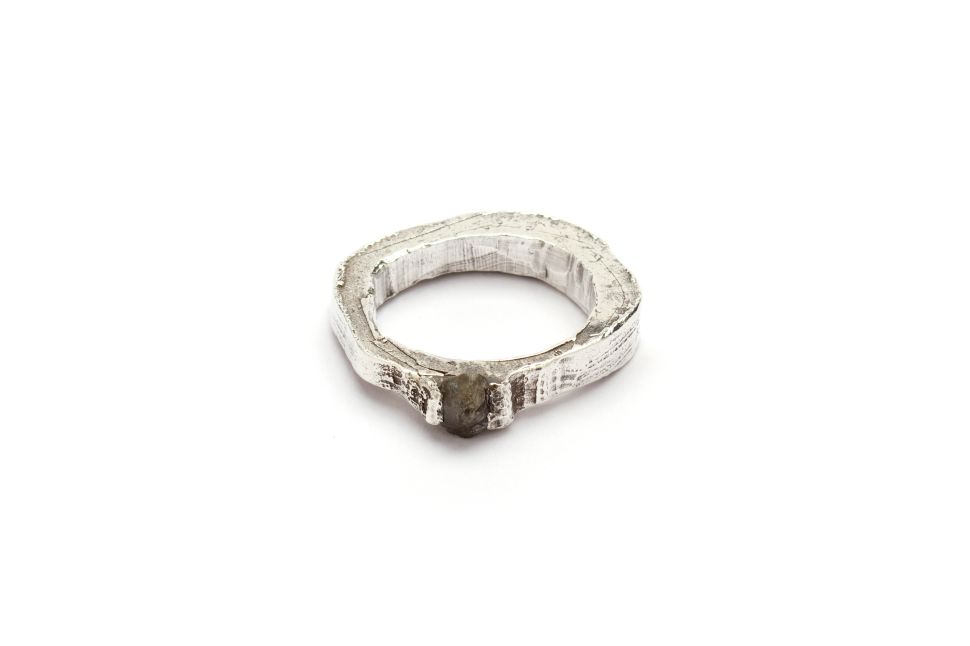