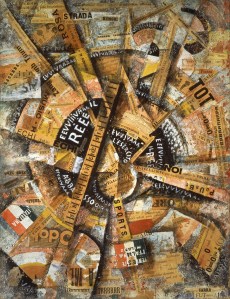 In 1909, F. T. Marinetti’s “Founding and Manifesto of Futurism” declared, “We will glorify war … militarism, patriotism … and scorn for women.” A new show at the Guggenheim Museum featuring the art of the Italian Futurists between 1909 and 1944, with nearly 360 artworks by more than 80 artists, is a scholarly and historical tour-de-force by curator Vivien Greene. Moving beyond the model of a solo museum show (which in this case might have focused on macho Marinetti, the movement’s founder), “Reconstructing the Universe” is an inclusive look at the movement with a reach (the show takes us straight through World War II) and depth that yields insights into how art embraced technology, and how artists used new technology to make art, in the first half of the 20th century.

Early Futurist paintings borrowed heavily from developments in French art of the time; they echo fin-de-siècle divisionism and Cubism but with a focus on new technology. Giacomo Balla’s Street Light (1911) shows his fascination with artificial light in its juxtaposition of moon and street lamp. Umberto Boccioni’s subjects are the dynamism of cities and tend to show a blur of movement. A handsome display of Futurist manifestos includes Marinetti’s “Destruction of Syntax-Wireless Imagination-Words-in-Freedom” but also Valentine de Saint-Point’s 1913 “Manifesto of Futurist Woman,” written in response to Marinetti’s techno-chauvinism, and her free-thinking “Futurist Manifesto of Lust.” These publications were distributed gratis on the street or sometimes even dropped out of airplanes. Futurism loved typographic or semantic abstraction; parole en libertà, words in freedom, was what it called these proto-Dada linguistic experiments. They are wonderful.

The movement unfolds in a chronological hang up the spiral of the Guggenheim’s ramp. It’s a lucky pairing of subject and environment—Boccioni’s familiar bronze sculptures of figures in motion look dynamite in the museum’s white spiral. Giacomo Balla’s 1913 paintings knocked me out— monochrome oil and ink renderings of speeding cars or the path of movement of people in the street.

While Balla and Boccioni might be well known, at least to art audiences, a discovery of the show is Fortunato Depero, an experimental painter and toy and product designer. His wooden Futurist toys—among them eight green-and-black rhinoceroses—and paintings of a Futurist theater, in which robots battle ballet dancers and bears, are magical. Depero also designed colorful geometric waistcoats that men could wear to display their radicalism.

During World War I, drawings of air raids by Marinetti give onomatopoeic rendering to the sounds of bombing: “Kkkkkkk” and “Bum bum bum, Zang Tumb Tuum” read the swirling lines of text. But the war also put a dent in Futurism: Boccioni was killed in action, and Marinetti wounded. Besides all the tanks that appear in paintings, standouts of wartime Futurism include Anton Giulio Bragaglia’s silent film, Thaïs, with its eye-popping black-and-white graphic set. 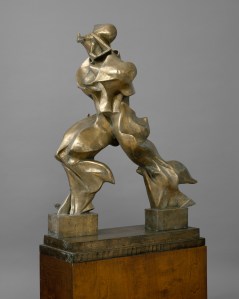 After the war, Balla’s decorative objects and theater design take center stage. In a room-size recreation of a proto-psychedelic laser light show he designed for Igor Stravinsky’s Fireworks, shapes composed of timed colored lights replace dancers. The work was put on display only once, in a 1917 dress rehearsal—the production itself never happened due to labor disputes. Balla’s technological-sentimental 1920 painting Numbers in Love looks like something you might see at any Downtown gallery today. Futurist dining rooms, recreated here, are confections of campy chic. Futurist photography features shaped paper, double exposures and long-exposures of blurred movement—the whole avant-garde bag of tricks.

Modern style doesn’t always equal good politics. The show doesn’t shrink from the fascist themes in late Futurist art, among them Depero’s sketch for the mural Proclamation and Triumph of the National Flag. (Futurism’s link with fascism may be why museums have shied away from the subject in the past.) The vertiginous perspective of fighter pilots obsesses painters who see the history of Italian art—home to the birth of perspective—altered by wartime technologies.

The final works in the show are five murals borrowed from the conference room of the Palermo post office. Painted in the 1930s by Benedetta Cappa, this is the first time they have been shown outside Italy. They honor Futurist themes: travel, electricity and 1930s communications methods such as the radio, telegraph and telephone. Sinuous telephone wires float over the Mediterranean. The stuttering geometries of the once-radical movement are enshrined in that perfect exemplar of modernist bureaucracy, the post office. It’s the perfect finale, showing as it does how fundamentally Italian traditions of painting altered radically with the new era.

Over the weekend, a group stormed the Guggenheim, unfurling banners protesting the museum’s labor practices in Abu Dhabi. In the protest, you could see echoes of Futurist strategies—video posted online shows free leaflets falling from the Guggenheim’s spiral ramp. It’s hard not to see parallels between Futurism and the art of our own time. As artists today embrace brash and aggressive blogs like Jerry Magoo, populist forms like Occupy Wall Street and the emotional affect of fonts and Facebook, they would do well to take a cautionary look at how Futurist aesthetics blurred into politics.