How to handle Woody Allen at the Oscars is weighing heavy on the minds of Hollywood this week, after Dylan Farrow’s graphic account of alleged childhood abuse by her adoptive father.

Without dismissing her outright, a few of the stars she has cited by name in a letter published in The New York Times have called whatever went on between the two a private matter and not one that concerns them.

Cate Blanchett, Oscar-nominated for her performance in Blue Jasmine, delicately distanced herself from the fracas, telling reporters in Santa Barbara: “It’s obviously been a long and painful situation for the family, and I hope they find some sort of resolution and peace.” Ms. Blanchett’s co-star, Alec Baldwin, normally good for a ham-handed comment if not a punch in the nose, also tiptoed away, telling reporters: “You are mistaken if you think there is a place for me, or any outsider, in this family’s issue.”

But is child rape really just “a family issue”? Framing sexual abuse of a 7-year-old as a private matter is exactly the kind of logic that has given pedophiles a pass forever. Take into account the crazy he-said-she-said dysfunction of this particular family and Mr. Allen’s status in Hollywood, and his accuser is sunk.

Briefly, for those who haven’t read the letter: Dylan Farrow, now 28, married and living in Florida, says Woody sexually assaulted her for the first time when she was 7 years old, after taking her to the attic and instructing her to lie down on her stomach and watch her brother’s train going round and round a track. That happened after various “grooming” exercises, including sleeping with her in his underwear, separating her from her mother and siblings, frequently sticking his thumb in her mouth and burying his head in her naked lap and inhaling.

Dylan has not spoken publicly before, but this is not the first time we’ve heard the allegations. In 1992, when Mia and Woody were acrimoniously breaking up after Mia discovered Woody’s naked pictures of her adoptive daughter Soon-Yi, Litchfield County (Connecticut) prosecutor Frank S. Maco announced at a press conference that he believed Mr. Allen had molested Dylan Farrow but wouldn’t charge him to avoid a traumatic trial for the young girl.

Hollywood and entertainment fans spent all weekend arguing about over whether Dylan Farrow really lived the creepy stories she tells in her letter to Nick Kristof or whether her adoptive mom, Mia, implanted the memories in her mind. I find it hard to believe that a grown woman would invent something as queer and specific as the lap-breathing and broadcast it to the world, bringing down humiliation on herself for life, not to mention the wrath and contempt of the star machine.

The awful images she depicted weren’t enough to gross out Mr. Allen’s supporters in Hollywood. There’s a tacit assumption among the aristocrats of consciousness that Great Men are entitled to whatever it takes to juice their creativity.

Woody is, of course, catnip to big actresses, all of whom would sell their souls rather than turn down a part. Ms. Blanchett took on what was surely billed to her as “the role of a lifetime” playing the cuckolded, cracked wife in last year’s cringe-worthily misogynistic Blue Jasmine.

Among Woody’s great enablers is Diane Keaton, his collaborator and friend, who picked up his lifetime achievement award at the Golden Globes. His apparent pedophilia gives a new meaning to Ms. Keaton’s bizarrely juvenile performance, as she serenaded Woody—wherever he was—with a children’s song called “Make New Friends.”

And anyway, Mr. Allen’s marked preference for female children and/or near-children puts him in esteemed company. Like Roman Polanski and J.D. Salinger (revealed in a recent documentary to have been afflicted with a strong preference for underage girls), men who spend their days humming “Thank Heaven for Little Girls” will not be called to task by fellow creative, whatever the evidence.

Salinger’s sickly friendships with little girls were always on open display, too, but that didn’t stop the literati from anointing him as a 20th-century genius. In both For Esme with Love and Squalor and A Great Day for Bananafish, his predilection for pedophilia was on full display. I remember reading the latter in high school and immediately picturing a man exposing himself to a girl underwater. I never got into a Salinger book after that.

Their real-life methods vary, of course: Mr. Polanski, anally raping a 13-year-old in the louche heyday of 1970s Hollywood, Salinger grooming the model for Esme from girlhood, only to dump her the day after he had sex with her as an adult, and Woody allegedly hoovering up the scent of female childhood in the lap of his girlfriend’s adopted child.

What they all have in common is a cheering section of supporters, most of whom can put “Oscar nominated” or “member of the Academy” somewhere in their biographies. In the Woody camp right now, one finds Robert B. Weide, “an Oscar-nominated and Emmy-winning filmmaker” who penned a massive defense for the Daily Beast this weekend, strongly suggesting that Dylan is making it up or at least describing an implanted memory. According to Mr. Weide, who made a documentary about Woody, the whole story could be a fantasy that grew out of Mia’s influence over her troubled daughter, at a time of deep turmoil in the family unit as sister Soon-Yi and Woody hooked up.

Wiede and other Woody supporters have a point. In the parlance of adoption reformers, Mia has her own pathology, being a “collector,” who adopted 14 children, many of them “special needs” kids. Think of cat ladies, and you get the idea.

But it is absolutely impossible to watch Ms. Blanchett emoting in the dramatic final scene where Mr. Baldwin tells her he’s in love with a young woman and not suspect that Woody was directing her to channel Mia on that day in 1992 when she discovered the nude photos of Soon-Yi.

As I wrote back when Mr. Polanski was arrested in Switzerland in ’09:

To many artists and their enablers in the creative world, the prosecution of a major male figure for something as apparently insignificant as forced sex with a female child is a witch hunt, the persecution of a genius by low-level, unimaginative legal drones, who wear uncool suits and wouldn’t know a semiotic deconstruction if it smacked them in the face.

Hollywood enablers are not alone. We, as a society, are O.K. with it too. Mr. Allen’s preference was never hidden. He cast 16-year-old Mariel Hemingway as his own lover in Manhattan. Hemingway later confessed that he was the first person she ever kissed and that she was “way too young” for that role.

We live in a society in which pretty young girls are presumed to be just what the doctor ordered for older men. We don’t marry off 8-year-olds to their uncles, Saudi-style, but we are not revolted by the image of gross Woody Allen in his late 50s kissing Mariel Hemingway. We consume such images from the point of view of male privilege. Unless and until Mariel, years later, says she didn’t really like it, we don’t even imagine what it meant or felt like from her point of view.

Celebrating the kind of old-man/girl love that Woody promotes in his movies is on one end of a spectrum of male privilege. At the other end are Dylan’s story and the fact that teen girls can’t ride subways and buses in our own great city without having to fear being groped and exposed.

Brooke Axtell, the founder of Survivor Healing and Empowerment, points out that 97 percent of rapists will never spend a day in jail.

Statistics like that tell us how far we have not come since Sigmund Freud noted that late Victorian women were conjuring up eerily similar memories of childhood sexual abuse. The great doctor chose not to devote his career to studying the pathology of men who couldn’t keep their hands off small females. Instead, he labeled these women hysterical and set about trying to figure out what internal flaw caused their disorder.

As we come to bury Woody, not to praise him, it’s helpful to recall that the founder of psychoanalysis, which is after all, Mr. Allen’s religion, was in the end a better friend to predators than to prey. So, too, is Hollywood. 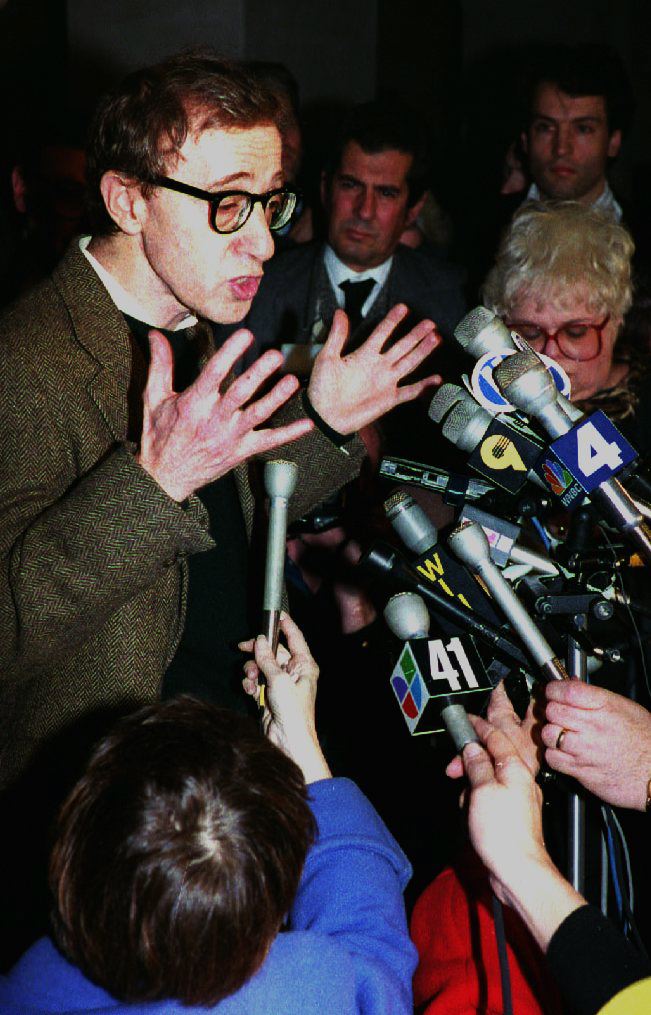