“Currently in the city of Newark, we operate without the benefit of our Office on Aging. For us, this is absolutely unacceptable,” Jeffries said to a crowd of about 50 people at the Essex Plaza, a seniors-only building on Broad Street. “Under our administration, the Office on Aging will be reorganized, expanded and renamed as the Office of Senior Services. [The office] will aggressively pursue public and private funding to increase senior citizen programs and services.”

Jeffries proceeded to outline his senior policy plan, which includes the creation of a central office unit designed to develop and coordinate senior services throughout the city. The city will operate full-day senior citizen centers Monday through Friday, improve transportation for senior citizens and the physically challenged, and facilitate contact with the federal, state, county and local public and private agencies involved with senior welfare, according to the Jeffries plan.

Jeffries added that following the recent rise in criminal attacks on seniors in Newark, he would work with the city Police Department to establish “safe corridors” around senior buildings such as Essex Plaza.

“When I grew up, you wouldn’t even look the wrong way at a senior or an elder,” said Jeffries, who was raised by his grandmother. “Nobody will put a fingertip on our seniors.”

Jeffries also elaborated on how these initiatives would be funded considering the difficult fiscal environment faced by the city.

“I’ve heard different reports about the nature of the deficit that we have now,” said Jeffries, referring to the estimated $30 million budget deficit looming over the state’s largest city. “I think there’s some fat that’s been reported on the clerk’s side and on the council’s side. Our health care expenses are growing at a rate that we frankly cannot sustain. We’re absolutely going to hire more police. We have to work as a team to find savings, and we have to make other types of investments.”

Jeffries, the former state Assistant Attorney General, also made a dig at the expense of his main rival in the mayoral race, South Ward Councilman Ras Baraka.

“If you have the kind of mayor who alienates partners at the state level, we’re not going to be able to persuade them to invest in the city of Newark,” Jeffries said.

“I’ve seen mayors come down with their team and work the legislators and the executive, and be able to get what they needed for their cities,” said former state Assemblyman Wilfredo Caraballo (D-29), a Seton Hall Law professor who is now an at-large member of Jeffries’ council slate. “If your city can’t do that, then your city is in trouble.”

The Baraka campaign did not immediately return calls seeking comment.

Jeffries took the opportunity at the announcement of his senior policy plan to also officially introduce his council slate in the May election.

Jeffries will also have South Ward candidate Brian Logan, Central Ward candidate Bishop Andre Speight, West Ward candidate Kevin Waters and at-large candidate Lynda Lloyd on his ticket. The final at-large spot has been left open for the time being, according to the Jeffries campaign.

Lloyd, a former Baraka staffer, explained why she chose the Jeffries team over Baraka.

“[Jeffries] is the type of leader who is willing to listen,” Lloyd said. “Unity is really what we need in the city of Newark right now.” 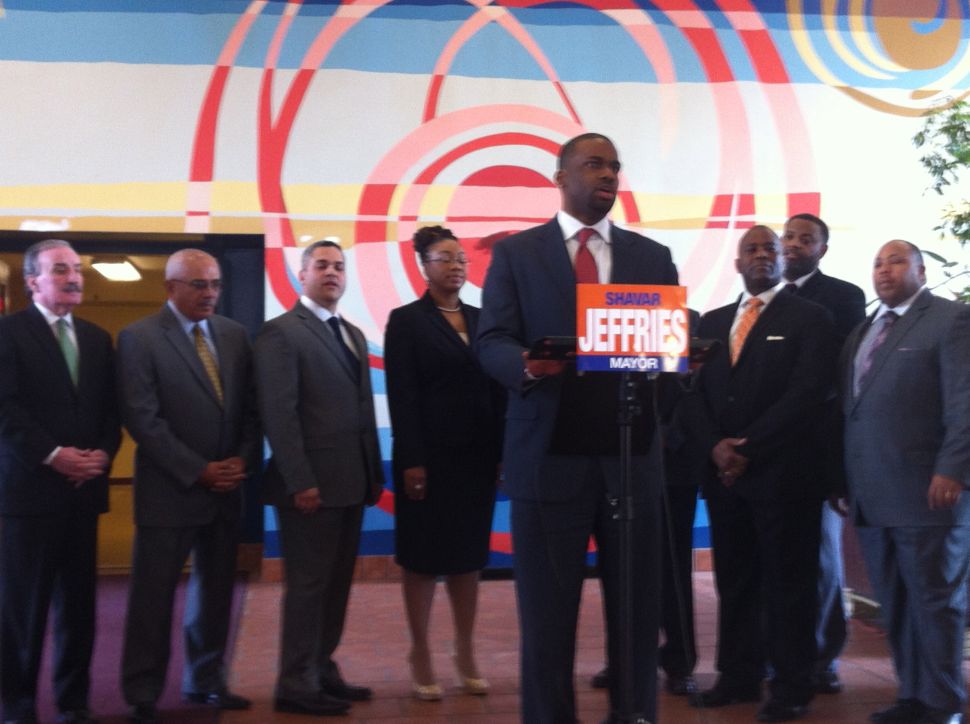