NEWARK – Call it the battle of the Brick City supermarkets.

Former Governor and current State Senator Richard Codey endorsed South Ward Councilman Ras Baraka in the Newark mayoral race at an Ironbound supermarket on Thursday. Minutes later, Shavar Jeffries, another candidate for Newark’s top spot, rolled up on a South Ward supermarket with its gates rolled down and laced into Baraka’s record.

“We stand here today, with the closed Key Food supermarket behind us, to highlight the stark choice facing the people of Newark in this election,” Jeffries said. “The people of Newark have two fundamentally different paths ahead of them – they can decide to go back 50 years or go forward 50 years. Campaigns are about contrast, and the contrast between me and my opponent Councilman Ras Baraka could not be more stark.”

Jeffries proceeded to lambaste Baraka on a host of issues, including crime, jobs, and economic development, referring to Baraka’s record on public safety as one of “absolute failure.”

“Murders are up 70 percent in the South Ward under [Baraka’s] watch. That is a staggering number,” Jeffries, a former state Assistant Attorney General, said. “My crime plan focuses on proven investments in prevention, enforcement and re-entry that I have personally supervised and that have produced results. Councilman Baraka, on the other hand, has a failed record where murders have reached a historically high level under his watch. His approach to crime fighting is based on apologizing for, and compromising with, violent criminals and gang lords who have murdered Newarkers.”

Jeffries pointed out that Baraka had stood at the same supermarket close to a year ago, touting its opening as a needed infusion of economic and quality-of-life benefits into the neighborhood.

“Not even a year later, this supermarket stands closed and shuttered, a glaring example of the wholesale lack of jobs and economic development in the South Ward,” Jeffries said. “Throughout my career, I have partnered with the business and investment community to put Newarkers to work, buy homes and escape foreclosure. In contrast, Councilman Baraka has for decades berated the investment and business community. He is not a bridge builder, he is a bridge burner. His history and record will scare away investment.

“Baraka’s failed approach to development will lead Newark on the path to becoming the next Detroit,” Jeffries added. “It’s unfortunate that when [Baraka] wants to have a press conference, he has to go to the East Ward to go to a supermarket because there isn’t one in his own ward. The one that he bragged about a year ago couldn’t make it past the first year.”

“Shavar continues to remain out of touch with the residents of Newark,” countered Baraka campaign spokesman Frank Baraff. “Parents in Newark are upset that Shavar Jeffries is absent from the struggle to stop school closings. Unions are angry because Shavar has been AWOL from the fight against privatizing our schools. Community activists are upset that Shavar has not offered a plan to stop the violence now, not years down the road.

“So what does Shavar Jeffries do? He copies Ras Baraka by holding a press conference at a supermarket,” Baraff added. “If he really wants to copy Ras Baraka, he should get involved in the fight against school closings, speak out about privatizing our schools and dare to propose stopping the violence through a gang ceasefire.”

But when asked by PolitickerNJ.com on Thursday about Codey’s comments about power brokers made earlier in the day in the Ironbound, Jeffries snapped back.

“That sounds very ironic at a press conference to announce the fact that Governor Codey, who doesn’t live in Newark and who is an outside power broker, is supporting [Baraka],” Jeffries said. “The hypocrisy of that is jaw-dropping. His district doesn’t even include Newark.”

Back at the site of the closed supermarket on the corner of Springfield Avenue and South 11th Street, neighborhood resident Tracy Callender expressed his frustration about what he saw as some of the local facts of life.

“To shop for food, everybody jumps on the bus to Pathmark [on Springfield Avenue and Bergen Street], said Callender, 58, a retired union carpenter. “Their prices are really high. You’re stuck between a rock and a hard place. You’ve got nowhere to go, but you’ve got to go shopping.”

Jeffries, a South Ward resident, referred to another source of frustration in the neighborhood recounted to him in the streets.

“I spoke to one parent the other day who talked about when she takes her babies to the bus, she has a knife in her coat because she’s so fearful about what’s happening in her community,” Jeffries said. “The people of the South Ward do not deserve to live like this.” 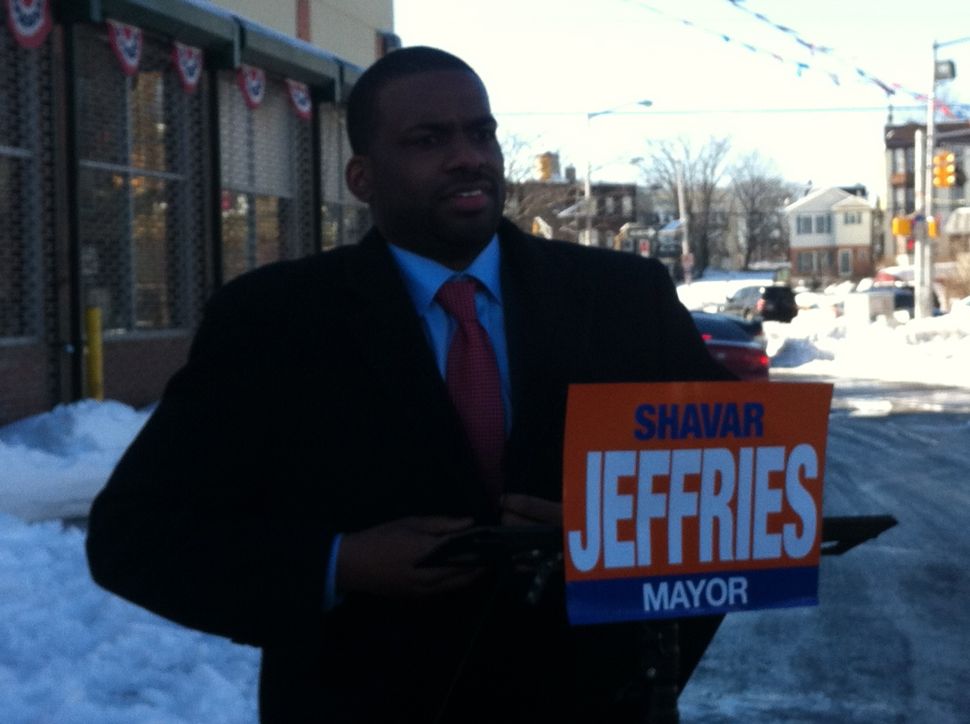