John Gangemi, a candidate last seen mounting an unsuccessful bid against Eric Adams in the Brooklyn borough president’s race, will mount a run against the Republican lawmaker, he said today.

“Yes, I’m running,” Mr. Gangemi told Politicker. “Why not? Listen, I have 50 years of experience. I’m a former elected official, a former prosecutor … I don’t agree with [Mr. Golden’s] philosophy, I don’t agree with his legislation. I think it’s time for a change. He doesn’t reflect the neighborhood and community he was elected to represent.”

Mr. Gangemi, a city councilman several decades ago, will face uphill odds. Mr. Golden is a strong fund-raiser and posses superior name recognition, which allowed him to comfortably defeat another Democrat, attorney Andrew Gounardes, two years ago. The district, roping in neighborhoods like Bay Ridge, Manhattan Beach and Gerritsen Beach, was redrawn in 2012 to include even more right-leaning territory.

Mr. Gounardes told Politicker that he hadn’t yet ruled out taking on Mr. Golden again as well, but sources say a second bid this year is unlikely. Starting Monday, Mr. Gounardes will be working as the general counsel to Mr. Adams, now Brooklyn’s borough president.

In his last bid for office against Mr. Adams, Mr. Gangemi was booted from the ballot and raised relatively little money. But the Bay Ridge attorney said he is serious about winning.

“I won’t get knocked off the ballot,” he declared in a response to a question about what would be different in this year’s campaign. “I am seeking the backing of the county leader, Frank Seddio, and I am seeking backing of all district leaders that fall within my district.”

A spokesman for Mr. Golden, when reached for comment, did not directly address Mr. Gangemi’s challenge but extolled the work the senator has done for his district.

“While we take every challenge seriously, we believe the voters, just like they have for the past several years, will choose to reelect Senator Golden because of his experience, dedication, and understanding of the issues that effect our communities,” said the spokesman, Raymond Riley. “No one works harder than Marty.” 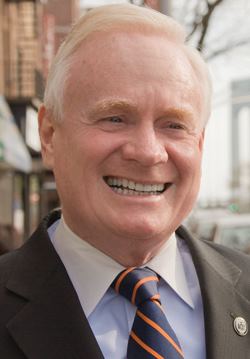