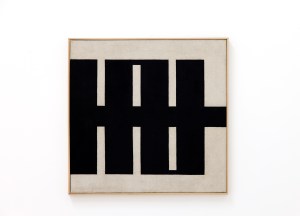 It wouldn’t be quite right to say that the Croatian painter Julije Knifer decided in 1960 to paint only the meander, that right-angled undulation New Yorkers of a certain age will remember from their paper coffee cups. Because while Mr. Knifer, who died in 2004, did paint nothing else, his paintings weren’t repeated studies of a lonely motif but the serial exploration of a potentially infinite pattern, a singular (and necessarily unfinished) project. The 27-inch high oil M 24, from 1967, uses a thin, semi-spiraling, vertically asymmetrical white meander to divide syncopated blocks of maroonish brown and black. Nested apostrophes like the yin-yang sign are there if you look for them, but what the shapes really resemble are interlocking telephone handsets, or a crude iron helmet: It’s the narrow space where the raw brutality of primitivism overlaps with the transcendental clarity of high minimalism. That the bottom left edge, and the upper two thirds of the right edge, are left white, where the meander begins and ends, is only, at this point, a hint.

But in 1969’s horizontally oriented acrylic MK 69-43, the couple of inches of white border around the top, right and bottom of a single section of thick, compressed black meander—one crest and one fall—and the two white bars that create the shape—one stalagmite and one stalactite—are as positive as the black. If anything, they look more positive, like a brushed aluminum grill against the abyss. But black and white are both so innocent, each so unmarked except by the contours of the other, that they can’t be separated for long enough, even notionally, to assign a foreground and background.

Three large untitled acrylics from 1992, each 6-and-a-half feet by just under 6 but looking much more vertical because of their design, demonstrate how robust even minimal distinctions can be and how much more clearly they operate when stripped to that most hypothetical minimum. The white, here, is basic, each canvas separated from the wall only by its slight projection; two thin, obedient, sharp-cornered black lines in the first case—a backward L sitting in the bottom left corner and then another bar, to its right, hanging from the top—divide the face into three equal columns, as if to say, «Here is where the meander would be.» That the corner is implicated, this time, only pushes both colors back—the white remains basic, but the black looks inset.

The second canvas lays a black strip all the way across the bottom and then sets on it another backward L, dividing the infinite into two columns offset like a Slinkie; the third accomplishes the same end without the first black strip. And so on: It takes only a horizontal bar to transform the meander in MS 09, a 20-inch oil from 1962, into a tally that somehow keeps counting even when it’s already complete