Last night was the premiere of Jimmy Fallon’s tenure on The Tonight Show. How well you think he did will probably be entirely dependent on how much you live-tweeted the production. (All of it? Did you live-tweet all of it?) Sites like Buzzfeed and The Huffington Post did a fair job of chronicling every moment of the program, in case there was anyone on the Internet who felt super-strongly about the show but couldn’t get to a TV in time. We shouldn’t really have to recap very much for you.

But ICYMI! Besides a dance party on the roof of 30 Rock with U2 and the reemergence of Joan Rivers on the show (who apparently had some decades-old feud with Johnny Carson that we were all supposed to know about), the best part of the evening was undoubtably the Will Smith “Evolution of Hip-Hop Dancing” segment.

DOUBLE points for the unspoken commentary on twerking. Twerking is the worst thing to happen to hip-hop, we can all agree. With that Leg Thing No One Can Do coming in a close second. 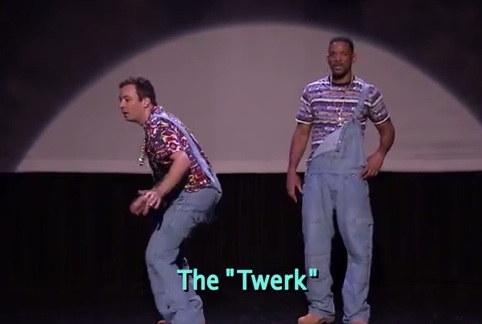