Burlington and Ocean Republicans are trying to resolve a difficult political situation in the aftermath of the retirement announcement of U.S. Rep. Jon Runyan (R-3) ahead of county conventions set for the first week of March.

Sixteen candidates in the GOP want to succeed Runyan. Sources say none of them clears the field as the Eagles offensive lineman did four years ago. Those candidates with money are complicated, while those uncomplicated candidates have no money.

Further muddying matters is the presence of fierce movement conservative Steve Lonegan in the contest, who offers a combination of money, motivation and name ID but also frightens Burlington County in particular, where the organization has taken pains to build a brand name in opposition to Lonegan’s Rand Paul-style gun-slinging.

The district splits in half, with the edge going to Ocean County, and in the background of every politico’s memory lurks the memory of that demonic 2008 GOP Primary collision.

Every candidate has a big Achilles Heel.

One is great and says he can put big money on the table.

Another can get the carpenters’ union.

But he may be too close to Democrats.

Another has street cred as a local mayor.

But (newsflash) he isn’t in the race anymore.

Right now, Burlington likes Tom MacArthur, the former mayor of Randolph, a CEO, well heeled-businessman, and local government-groomed prospect who checks every box required by BurlCo starting with the all-coveted “self-funder” but who also comes handcuffed to a potentially harmful narrative that he’s not from the district.

He’s got a beach house in Ocean.

But he hasn’t built a business, raised a family or forged a life in CD3.

Macarthur’s lone liability gets magnified alongside Lonegan, who in the wake of his losing but extravagantly creative 2013 race for the U.S. Senate moved to Ocean in preparation for a Congressional run.

After his loss to Booker, Lonegan decided he couldn’t win the entirety of New Jersey.

Runyan’s retirement in the Republican-leaning Third District where Lonegan recorded solid numbers last year opened up the possibility for him of a more coherent battlefield.

When he saw Lonegan moving forward with plans to get in the contest, former Chairman Glen Paulsen went on the record with a declaration of opposition to the former mayor of Bogota.

Always alert to Democrats mounting movements on their turf out of South Jersey, BurlCo Republicans said if Lonegan gets in the contest they would work to oppose him.

While Burlington suffered Lonegan’s presence at their screening for the CD 3 seat, Ocean County GOP Chairman George Gilmore – leader of the state’s most prodigious Republican stronghold – graciously welcomed the 2013 GOP nominee for the U.S. Senate.

As they sweated Gilmore’s courtship of Lonegan, they prayed the Ocean GOP boss was simply finessing the movement conservative on his way to gently – but respectfully – telling him he wouldn’t be the candidate.

But Gilmore, sources say, doesn’t want to have to go to war with Lonegan in a bloody GOP Primary.

He also appreciates MacArthur’s strong points, but he’s alert to the potential complication of empowering Lonegan (who already has name ID) with a candidate not from the district.

If he and his people ultimately cannot reconcile themselves to Lonegan, they want to be able to fight with a homegrown candidate and not remove that issue from their arsenal with an establishment choice who is likewise an out-of-towner.

The trouble again is the absence of that game-changing candidate with sufficient money and name ID to withstand the Primary-threatening Lonegan.

Gilmore, sources say, has not ruled out Lonegan.

One of Ocean’s biggest worries about a candidacy by the former mayor of Bogota is his Hurricane Sandy answer last year on News 12, when he declared – in robust movement conservative fashion – that he would turn down federal government Sandy funds.

In his screening this week before GOP committee members, Lonegan modified his stance with the explanation that he would take the funds only if the counties had oversight of those funds’ distribution.

The remark was well-received. 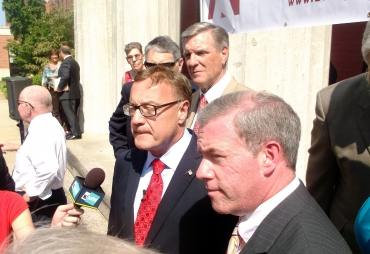