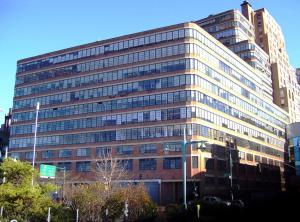 Today around 4 a.m., employees of Louise Blouin Media’s New York office in Chelsea were told not to come into the office due to the “inclement weather.”

You might be forgiven for thinking this post was written yesterday (when 4 a.m. looked pretty nasty and commuter headaches were frequent), not today, as we currently rest at a sunny 39 degrees Fahrenheit.

Since the office was in fact open and running smoothly yesterday, our tipster speculated that the closing may not have been weather-related. Tomorrow is the 15th, so employees were set to receive their paychecks today. With Presidents’ Day Monday, that means the employees are out of luck until Tuesday.

None of this would be notable if Ms. Blouin didn’t have a reputation for not paying employees in a timely fashion. This week has seen Ms. Blouin in Keith Kelly’s New York Post column twice, for losing a number of former employees to Artnet and for a lawsuit filed by the former publisher and associate publisher of Art + Auction magazine, who say they’re owed almost $250,000 by the company.

(The company will soon move offices, though in that first Post story Ms. Blouin again denied that the move was motivated by any back-rent issues. Employees have, in the past, been locked out over such disputes.)

Blouin President Ben Hartley, who frequently acts as company spokesman, did not respond to a question about why the office was closed today.