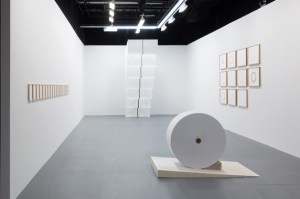 Installation view of Stettner’s show at the Kitchen. (Courtesy the Kitchen)

Boru O’Brien O’Connell and Luke Stettner use a long, white wall to divide their double New York gallery debut into a stereopticon of bicameral thought. Above the wall, which extends from the back of the gallery right up to an entering viewer’s nose, are a few feet of black curtain, closing the gap between such formal divisions and the Kitchen’s pipe-lined, theatrical ceiling.

To the right, Mr. Stettner’s show, the brightly lit “this single monument,” is almost blinding. Consisting mostly of works on paper whose minimal markings emphasize the ambivalent blankness of the color white—is it a plane for expression or the ultimate sort of opacity?—it also includes a few sculptural installations that work the same way. Eleven framed, clay-colored circles in a grid—made with “slip,” the mixture of water and clay used to lubricate a turning pot, they’re collectively titled this single monument (circles)—effectively dematerialize a giant roll of paper set on the floor between wooden and stone wedges. But they also dematerialize themselves: One circle so faint that it’s barely visible seems a less forceful mark than the empty space, at the bottom right corner of the 3-by-4 grid, where a twelfth drawing would have gone.

Nineteen framed excerpts from the letters of William Carlos Williams are preoccupied with death and absence, giving their paper a sinister gleam. But if death is only a term in the thoroughly positive functioning of a grand dialectic, where do we, ourselves, stand? It’s not clear whether Mr. Stettner’s iconic constellation of charcoal eyes is looking or being looked at, but the brownish, Rorschach-like this single monument (impression)—the diffident impression on paper of one of the artist’s friend’s recently birthed placenta—looked to me like a comfortably curled-up angel blowing a long trumpet into heaven. 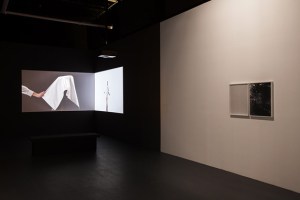 Installation of O’Connell’s show at the Kitchen. (Courtesy the Kitchen)

If we’re all just tokens of meaning, to put it another way, where does the meaning finally land? To the left, Boru O’Brien O’Connell’s show, “Draft, Capture, —,” shares Mr. Stettner’s white walls and gray floor, but it’s dimly lit and dominated by a black-painted back corner in which two perpendicular white screens are inset. Background (Climacophobia), a floral, post-Escher silver print of spiraling steps in black, white and gray, is followed by Placeholders/1979, a series of gray-against-black photos of common objects. (Two missile-like foam earplugs bring to mind Karl Blossfeldt’s Art Forms in Nature.)

But the signal act of semantic transubstantiation is the two-channel video Every movement does have a background, but every background is potentially useless. Using a mixture of appropriated texts and his own, recited in English, French and Maltese; shifting, animated rectangles (one of which morphs from a horizontal monolith to a dramatic aperture to a blank window); scenes of a child putting together a wooden drawer, the top of his own head, and an animated version of a drawing from John Vassos’ book, Phobia, Mr. O’Brien O’Connell takes a severe, theatrical, overly intellectualized language and bends it perpendicular to itself, very nearly capturing the slippery, interchangeable, real-and-not-real quality of things.