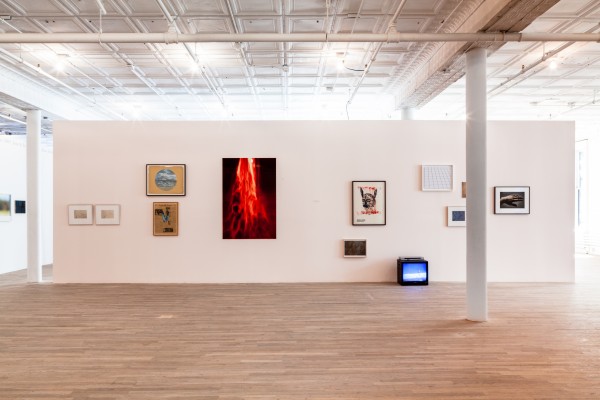 The timing of this exhibition couldn’t be better. Just as articles have been appearing describing art market speculators’ price-flipping of paintings by artists in their mid-20s, this vast show at Artists Space of the collection of the artist, writer and founding member of ’80s and ’90s art collaborative Group Material, Julie Ault, hints that there are longstanding alternatives in the New York art world in which generosity of spirit has greater sway than money.

The show, titled “Macho Man, Tell It to My Heart,” is a quirky celebration of a network of friendships and lovers spanning decades, a 200-work group show with a slight, loving aesthetic. Overflowing and overwhelming, it resists superficial examination or easy commodification. Walk into Artists Space, and you are greeted with Tony Palmer’s The World of Liberace, a 1972 public-television portrait of the entertainer. As he catalogs his prized possessions for the camera, they are illuminated with the glitter of rhinestones hitting a Vaseline lens. Next to this display of professional glamour, Mike Glier has painted on found wooden sticks leaning on the wall the words “Hope,” “Intimacy,” “Tolerance,” “Empathy,” “Generosity,” “Honor” and “Endurance.” This is a show about the value of those terms. In the next gallery, Felix Gonzalez-Torres’ Untitled (Last Light), 1993 is bare poetry: 24 glowing lightbulbs hanging down from the ceiling. It’s a rhyme with Liberace’s glowing glamour and an antidote, too.

Gonzalez-Torres’ painted word portrait of Ms. Ault frames the edge of one wall: “Jesse Helms, 1989. Felix, 1987. Walkman, 1979. Joshua Tree, 2000 …” from Untitled (Portrait of Julie Ault) (1991). The text mixes the personal with the public, the political with the private, in just the way “Macho Man, Tell It to My Heart” does. If Andres Serrano’s Klansman photos from the 1990s hint at the incendiary politics of the era, you discover that Mr. Serrano was also Ms. Ault’s husband during the time of the NEA trials. 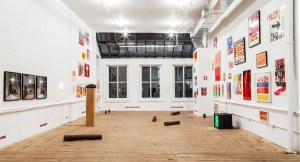 Much of the art here feels like gentle ephemera. Often, works are labeled with dedications to the artist; a Roni Horn drawing reads, “For Julia with love in the desert and elsewhere.” There are many rhymes—a Paul Thek blue paint-on-newsprint fishtail is hung on the same wall as Peter Hujar’s photographic Study of Thek’s Hand (1967). The wall is a pale pink thanks to a Louise Lawler, and a burning red Serrano hangs in its center.

Jim Hodges is a standout among the 40-some artists in the show. His Almost (1994) is a trail of tiny, pink silk flower blossoms pinned to the wall. Two almost-invisible colored-pencil circular wall drawings, also by Mr. Hodges, are twin portraits of Ms. Ault and Martin Beck. Mr. Hodges’ A Diary of Flowers is a slight set of ink-on-paper napkin drawings pinned to the wall. These were gifts willed to Ms. Ault by Gonzalez-Torres upon his death, from AIDS, in 1996. Mr. Hodges’ works are ephemeral, not hard-edged; their sweet conceptualism resonates with the show’s curation. Tony Feher’s Portable Memorial (1993), a painted cardboard box adorned with plastic flowers, is another beautiful little work exemplifying the show’s unembarrassed embrace of sentiment. The show has plenty of visually stunning moments, too, like Ms. Horn’s more formal Gold Field, a large square of pure gold foil lying straight on the wooden gallery floor.

The sprawling exhibition continues at 55 Walker Street, where two more levels of art can be seen, as well as through a screening program at Anthology Film Archives. A catalog has photographs of the works installed in Ms. Ault’s home, nestled among the Eames chairs and hung around the George Nelson clock and above the Moroccan rugs and books.

“Macho Man, Tell It to My Heart” calls into question the current system of art stars, proprietary galleries and celebrity curators—indeed, much of the professionalized art world as it exists today. It instead models what it means to be part of a network of friends involved in making and showing art. The curation makes visible the rich social networks created between these artists. What is most tangible is the care, love and political commitments that threaded their lives together.