In a few weeks, man will face off in an epic battle against machine — in a game of ping pong.

At the beginning of March, robot manufacturing company KUKA Robotics will open its first plant in Shanghai, China. To celebrate, KUKA has recruited ping pong pro Timo Boll to challenge the company’s fastest robot to a table tennis battle royale, which will ultimately determine whether humans or robots will win the race for world domination. Just kidding. It’ll probably just show that KUKA’s “Agilus” is a really freaking fast-moving and powerful robot.

The showdown will take place during KUKA’s Shanghai Grand Opening festivities on March 11.

“There will be an introduction to the highly skilled KUKA Team, an overview of KUKA products produced in the new plant, and the opportunity to meet table tennis legend Timo Boll,” the event’s official site says. “The capstone will be the thrilling duel between Mr. Boll and KUKA’s lightning-fast Agilus robot. Who will win? Stay tuned to find out!”

To further highlight the significance of the event, the company put together this extremely intense YouTube video, which looks kind of like a trailer for some dystopian version of Balls of Fury wherein Christopher Walken’s character has been transformed into a crazy robot. 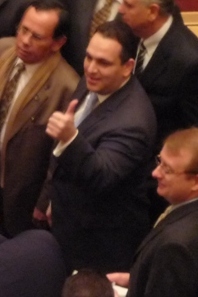 Filed Under: Innovation, Sports, robots, Ping-Pong, rise of the machines