My name is Hugue Dufour. First name “huge” but with a hard “G,” like “big deal.” I am a chef from Montreal, where the streets are paved with meat and men who can handle it with skill are worshiped as sun gods. I was once such a man. As a partner in the famous meat parade Au Pied de Cochon, I was young, handsome and had a way with a cleaver. I could turn pig’s feet into pork gold, rave duck fat unto the joy fantastic and jimmy the flavors of protein open like picking a lock with a hairpin.

In Montreal, I was Le Hugue, a huge big deal, but in 2010, my wife, Sarah Obraitis, and I opened our first M. Wells in an abandoned luncheonette far from Montreal, on a block of Long Island City so barren and industrial it looked like a Bernd and Hilla Becher typology. It was brick and brown, rust and weeds, overlooked and anxious. M. Wells was a crazy move, but don’t you know I’m loco, ese?

The diner was our baby. We put our lives into that shit bucket. We were young, and our audacity was such that not only did we believe we could snatch this rust-bit diner from the skeleton hand of time, but we could build a restaurant to which all of Manhattan might come. Such is my talent—to deny it is simply false modesty—that we were right.

When we opened, we had more lines than a Sol LeWitt, more volume than a Marshall stack and more buzz than a bad connection. The cuisine was singular, ostentatious, idiosyncratic. To “M. Wells” something became a verb meaning “to make unhealthy and delicious.” I was the Hieronymus Bosch of beef. In my kitchen, sea snails gallivanted with blood sausage, veal brains stewed in Grenobloise sauce. I stuffed the grilled cheese with horse bologna and foie gras, and defying even my own expectations, it worked. M. Wells was incredibly successful—for a time.

But the landlord was a wastrel, and we were callow. Foolishly, we had signed a one-year lease, and when our term was up, he jacked the rent. His venal cash-register eyes saw only our money, though we had little. Ultimately, we had to walk.

I refer to the two years that followed as our time in the wilderness. We kept ourselves busy, or tried to, opening a lunch-only cafeteria at MoMA P.S. 1, a museum in Queens. But the place had no gas (no gas, no grill), and for a man like me, this was the equivalent of being stuck in second gear while the wide-open road begged high-speed conquest.

We never stopped looking for the face of our new M. Wells, just as parents of lost children see their missing in every tow-headed blur. And finally last year, we found the perfect place.

It was in a vacant auto-body shop garage just a few blocks from the old diner. Just a few blocks, I say, but really a world away. A low-lying churlish holdout in a valley of glass towers, aggressively fucking the sky.

We had more money now, and our bona fides were established, so the question wasn’t what we could open but what we should open. Clearly, recreating M. Wells Diner, raising it from the dead, was not an option, though, boy, that would be some zombie. No, the original restaurant belonged to a singular moment, not even in the donut of space-time to be repeated.

In our two years of exile, steakhouses had become what you call in this country “a thing.” A steakhouse, like a sucker, was born every minute. I needn’t bore you with an exhaustive list, but in New York, there included American Cut, Reserve Cut, Arlington Club, Bill’s Food and Drink, Strip House Midtown, Quality Italian, et cetera. 2013 was the annus mirabilis of the steakhouse. 2014, we decided, would be the annus mirabilis of M. Wells Steakhouse.

The steakhouse is the last refuge of a scoundrel. It’s the feeding trough of financial toughies, derivative heavies, market coolers and cigar-smoking, tit-staring foot soldiers of vulture capitalism. Alan Richman, the ass-grabby GQ critic who panned our first place, likes steakhouses. He would. He’s the type that does: a dick.

The worst part of the rise of steakhouses is that I love meat and knew that availing oneself of the food chain is not synonymous with being a dillweed. I had spent my career making delicious things out of former animals and serving them in strange arrays to adoring patrons, few of whom were the sort of swaggering man-folk who frequent steakhouses.

I could, I suppose, have opened a restaurant with an emphasis on meat, even reprising the outré excess of M. Wells Diner, without adopting the mien of a steakhouse. However, I didn’t actually want to avoid being a steakhouse. I wanted to destroy steakhouses, and in order to do so, I had to become a steakhouse.

This was our plan: We would create a steakhouse that would serve many wonderful delicious dishes but absolutely terrible steaks. We would punish those who come to our restaurant to order traditional steaks or to bask in the morgue-glow of steakhouse luxury. How many times does the monkey need to get shocked before he stops asking for a tasteless, chewy Kansas City strip ($50) or a T-bone ($55) so weary and thin it seems better suited to a Denny’s? I was ready to fall on my sword, cut off my nose and take some hits in order to slay the steakhouse. I would emerge, I thought, disfigured but not destroyed.

To bait this honeypot, we had to make a sincere effort, an M. Wellsian effort. Our subterfuge included creating a space whose beauty and vibrancy is still, four months after we opened, a surprise to me. The ceiling is covered in a floral gold-and-black wallpaper; onto one wall is projected a documentary of 1960s Quebecoise lumberjacks; behind the line in the open kitchen there’s cruise-ship-level personality. We hired a woman with leopard print earmuffs and purple hair to tend the grill and a handsome man in a too-tight suit to be maître d, and we built a 24-foot concrete trough full of Long Island trout, which we kill on command. I spoke to the media about wanting to serve rattlesnake and lion. The trap was set.

Of course, we also had to offer carrots, not just sticks. I wanted to reward trust and adventurous dining, and yes, even provide comfort to those I deemed worthy. This would explain the stellar pretzel rolls delivered in small cotton sacks and the irresistible stack of grilled pork chops served with psychotropically decadent anchovy butter ($30). The latter were like a fortune in poker chips soon to be forked over to the makers of Zocor.

Riffing on the steakhouse’s penchant for hermeneutic circles, I offered a clever shrimp-on-shrimp appetizer ($12), the seafood version of American Cut’s carrot-on-carrot, featuring two poached shrimp in a shrimp glaze and accompanied by homemade dirty cocktail sauce filled with clam guts. Working at my peak, I would serve uni with a lobster custard and call it Uni Super Royal ($12), a name no less grand than the tumbling flavors demand.

The menu is designed so that the more obscure the dish, the better it will be. There’s the Captain Korea Breakfast ($20), which means nothing to anyone but me, featuring an entire blood sausage, a thick rasher of bacon, one fried egg with homemade kimchi and a slick slice of sweet potato. It’s surreal and vaguely Korean, and no captain eats it, but all Koreans and all captains should.

Few outside my hometown know what a tourtiere ($70) is, but I would put it on the menu. The rustic Quebecoise meat pie, full of venison osso buco, grouse, quail and pork shoulder, is like a pate en croute but with the broth ladled over the dough. Like much at M. Wells Steakhouse, this, the best dish I offer, would hide beneath opacity.

As for those doomed fishies in the concrete trough, they became the truite en bleu ($30). Guests able to stomach ordering a real-time execution would witness them plucked from the pool, clubbed over the head, then gutted, bathed in vinegar and poached in a court bouillon. They arrive at the table Sinatra-eye-blue, with heads unnaturally bent, looking as sad and poetic as an Enrique Metinides photograph. But fresher fish you’ll not find, nor flesh more yielding to fork or pleasing to palate.

In short, I made sure there would be plenty to love. I am neither a sadist nor a fool. But those who insist on ordering macho Instagram-bait like the bone-in burger ($17) I would reward wickedly. The burger would be dense, dry and flavorless. Because who but a bonehead orders a bone-in burger?

My steaks would be exceptionally mediocre. Served plain, they’d be flaccid, greasy and inordinately expensive. Sure, you could get the M. Wells mustard to give it flavor, but that would cost an additional $5. Otherwise, it’ll just be a chewy meat slog. And don’t forget a crappy caviar sandwich that’s crappy because, well, if you’re idiotic enough to pay $49.99 for it, you deserve to be disappointed.

It’s a high-stakes gambit, of course. Some will argue that I simply couldn’t find a way to M. Wellsify a steak, that bringing my brilliance to a steakhouse was simply too difficult. Some may see M. Wells Steakhouse as a failure, but not me. I’m just playing the very, very long game.

If you come to M. Wells Steakhouse, you’ll leave hating either M. Wells or steakhouses. My hope, of course, is that by the adept use of our nonsteak carrots and the shitty steak sticks, it’ll be more the former than the latter. But either way, only one can survive. 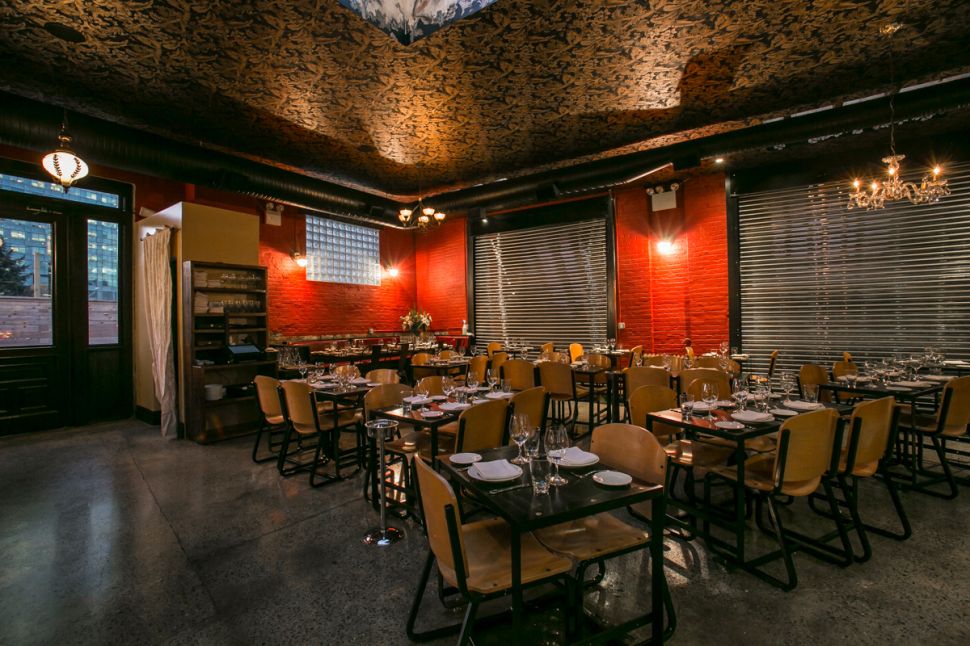