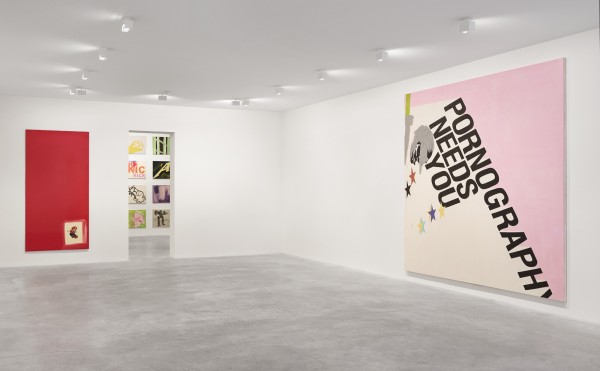 “Somebody wants to buy all your paintings!” shout the block letters in a small, sketchy black-and-white canvas that Michel Majerus made in 1994, updating Andy Warhol’s mid-’80s painting Somebody Wants to Buy Your Apartment Building! It opens the largest section of this rich three-venue show of Majerus’ work and could be read as both an invitation to celebrate (collectors bearing cash!) and to worry (what are they planning?).

That’s a very contemporary mixture of excitement and anxiety, just the sort of thing that Majerus, who was born in Luxembourg and worked in Berlin, savored during his short career, which ended in a plane crash in Europe in 2002, the same year as his lone U.S. solo exhibition. He was 35. Relentlessly, restlessly, he welcomed into his work up-to-the-minute imagery from the digital realm, galleries and the streets. Graffiti tags, billboards, rave flyers, PowerPoint-esque logos (“Motivation,” reads one bit of dull clip art he silk-screened), recent art and Nintendo and Pixar characters pop up in his paintings. Super Mario leaps in a white square in the corner of an otherwise slick red  monochrome from 1996; Toy Story’s Buzz Lightyear and Woody stand at the edge of a blue field that looks as though it is about to envelop them.

Majerus favored quick strokes and free-floating images over solid, fixed compositions, lighthearted cribbing over serious appropriation (he collaborated with Basquiat and Warhol in 1999, well after their deaths, by silk-screening one of their paintings and adding a few strokes of his own). Like those of his contemporaries, his painting surfaces often have a provisional quality to them, taking on the feel of computer screens, as John Kelsey and Daniel Birnbaum argue in a waggish chat in the show’s catalog. They seem to hold and store images and text only temporarily. A grid of 32 canvases, with simple abstractions (some elegant, some tossed off), text and photos (a prison cell, pills),  each 2 feet square, looks like a desktop of icons waiting to be clicked open.

As in the work of Pop artists like Andy Warhol and James Rosenquist, locating the pitch of Majerus’ pictures is a tricky business. Is he being ironic? Critical of a media environment that was switching into overdrive? Or is he reveling in its mad tangle of styles? He looks conflicted—clear-eyed but clearly enjoying himself.

What would Majerus have made of today’s social-media networks, overflowing with images generated on computers and mobile devices? Being an artist who favored graphics that were set to expire or already goofily dated (Tron posters feature in a 1999 series), he would likely have delighted in the vagaries of taste these networks foreground and the participation they solicit toward ends both personal and corporate. A year before his death, he made a painting that suggests he was ready. Like a lot of his best work, it looks unfinished. Big black letters cascade down between a pink field and a white one: “Pornography needs you.”